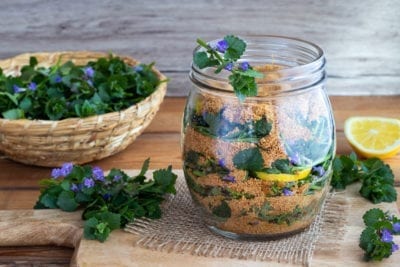 As a matter of fact, yes, creeping Charlie (also known as ground ivy) is edible. A prime and often cursed at weed of turfgrass and other landscape areas, creeping Charlie is native to Europe and southern Asia but was brought into North America for use medicinally. It rapidly naturalized and is now found everywhere in North America with the exception of the desert southwest and the coldest provinces of Canada.

Back in the day, however, folks were eating creeping Charlie as a cure-all for a variety of ills, from congestion to inflammation to tinnitus. Also, way back when, beer was a different animal. In the 16th century, hops were not available in England, but beer was and ground ivy was the flavoring as well as the preservative in beer production. In fact, one of its common names is ‘Alehoof,’ meaning ‘ale-herb,’ in reference to the time when ground ivy was used instead of hops.

Like its relative mint, this plant is difficult to control because it readily self-sows and easily roots from any leaf node on the stem. Since it grows so rampantly and is difficult to manage, let alone eradicate, it might be a good time to learn about eating ground ivy. Edible ground ivy does have a pungent, minty flavor that works well for use as an herb in some foods.

Aside from that, ground ivy is best used when the leaves are young and less pungent. It can be eaten fresh, although it’s a bit tangy. Leaves can be cooked just as you would spinach. The dried leaves can be used to make tea and are often combined with verbena or lovage and, of course, ground ivy apparently tastes great in beer.