Identify Poison Ivy And Plants That Look Like Poison Ivy 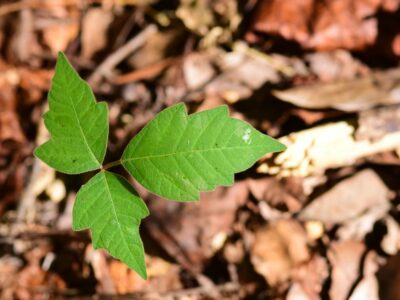 Most gardeners are well acquainted with poison Ivy (Toxicodendron radicans), the plant that can turn an outing into a nightmare of itching, blistering skin. But what about poison ivy lookalikes? It’s important to be able to recognize both poison ivy and plants that look like it to keep you safe in the great outdoors.

Let’s start with poison ivy, an excellent plant to avoid while gardening or hiking. Its stems and foliage contain urushiol, compounds that inflame and blister the skin. The result is itching and sometimes a quick trip to the doctor. This native plant invades forests, wetlands, and mountain landscapes, appearing as a shrub or a vine.

What does a poison ivy leaf look like? You may expect this notorious plant to have a dramatic presentation, but no, it looks like many other low shrubs or climbing vines. Each leaf has three leaflets, generally oval, roughly toothed, with the middle leaf largest. The leaves are alternate, meaning that they do not appear directly across from each other along the stem.

Poison ivy leaves are shiny and red-tinged in spring, but dull and green as they mature. In autumn, the leaves turn a mahogany red-brown. You might see yellowish flowers in early summer, followed by white berries.

Have you ever heard the saying “leaves of three, let it be”? This comes from the fact that both poison oak and poison ivy have leaves composed of three leaflets. Both plants produce clusters of white berries as well. But there are differences.

Is the plant a vine? That means that it is poison ivy, since it can present as a vine or a shrub. Poison oak only grows as a low shrub with leaves crowded near the tips of upright stems.

A variety of plants are poison ivy lookalikes, but do not cause the same kind of skin irritation. Virginia creeper (Parthenocissus quinquefolia) is one of them. These vines only cause an allergic skin reaction in people with allergies to them and are usually considered harmless.

How to tell them apart? Poison ivy always has three leaflets per leaf, while mature Virginia creepers have five. Young plants sometimes have less however. In addition, Virginia creeper vines are much less hairy than poison ivy vines.

Another plant that looks like poison ivy is box elder (Acer negundo), since the leaves also have three leaflets. But check the leaf arrangement. Box elder leaves appear directly opposite from each other along the stem, while poison ivy leaves are arranged alternately. This is also the way to tell climbing hydrangea (Decumaria barbara) vines from poison ivy. Their leaves are also opposite and usually have smooth edges.

Virginia creeper vines are generally less “hairy” than poison ivy vines. There are some short rootlets. Note the clasping rootlets that have what look like small suction cups at the tips.

Boxelder leaves can look very similar to poison ivy leaves, but they are opposite each other on the stem.

A good rule of thumb to follow for any look-alike plant is: If you’re not sure, don’t touch it!