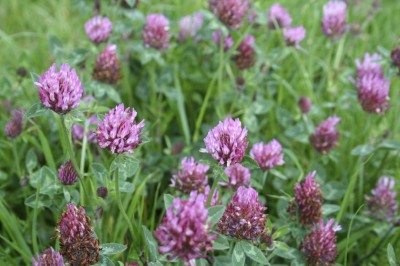 Red clover is a beneficial weed. If that’s confusing, consider its propensity for populating areas in the garden where it is not wanted and add to that the plant’s nitrogen fixing capabilities. It is a paradox; both a benefit and a pest whose presence in the landscape can be either planned or accidental. It is important to have full red clover plant info so you can make up your mind as to whether this plant is an angel or an imp.

Red clover has naturalized to North America, although it originated in Europe. It establishes quickly, grows in almost any soil and is hardy in drought and cool temperatures. Red clover has lovely purple flower heads, which are produced in spring. Each head is made up of many small flowers. The plant itself may get up to 20 inches (50 cm.) high but generally has a more rangy creeping habit. The slightly hairy stems bear 3 leaflets characterized by a white chevron or “v” on each. It is a short-lived perennial but easily and freely establishes itself.

The plant is a legume, which means it has the ability to fix nitrogen in soil. Farmers and gardeners all over use red clover as a cover crop and then till it in at springtime to release the nitrogen for use by other crops. In addition to cover crop or green manure, the plant is used as a forage crop and hay. It is also a healthy food and can be used as a tea, salad greens, or even dried and ground for flour.

Red clover in yards is often considered a weed but its beneficial properties and beauty should be considered before the gardener pulls the plant.

As a legume, red clover secures nitrogen in the soil which is of benefit to all other plants. Legumes harbor a nitrogen fixing bacteria called Rhizobium in their tissues. The relationship is beneficial to both organisms and the nitrogen is released into the soil when the clover is composted.

When red clover is used as a cover crop, it stops soil erosion, increases porosity, keeps weeds down and is then turned into the soil where it enriches it with the nitrogen loaded bacteria. Farmers and other soil management professionals know that red clover growing on land creates a better planting situation.

If you are still not convinced that red clover is beneficial and simply must remove it from your garden, there are several methods of control. Red clover in yards can become invasive and take over wanted plant species.

Professionals control red clover with tillage and applications of dicamba, if necessary. The home gardener will need to use an over the counter product deemed effective as red clover weed control. Always follow the instructions on the container and use any recommended cautions.