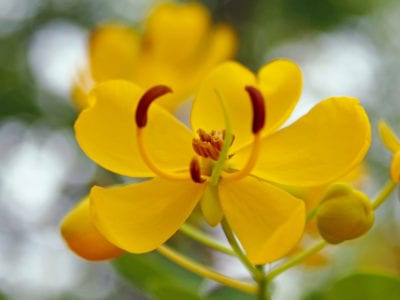 Sicklepod (Senna obtusifolia) is an annual plant that some call a wildflower, but many call a weed. A member of the legume family, sicklepod appears in springtime, offering bright green, attractive foliage and cheerful yellow flowers. But many people think of the plants as sicklepod weeds, especially when they invade cotton, corn and soybean fields. Read on for more sicklepod information and tips for how to get rid of sicklepod plants.

If you read some sicklepod information, you will find that this is one interesting plant. Look for a stalk up to 2 ½ feet (0.75 m.) high, smooth, hairless, oval leaves and showy, buttercup-yellow flowers with five petals each. Most striking is the long, sickle-shaped seed pods that develop from each flower after it matures.

The plant was used by indigenous people for medicinal purposes. However, another common name for this plant is arsenic weed, in reference to the weed’s toxicity when consumed, so it is best not to ingest it.

Sicklepods are annuals that bloom for one to two months, from late summer into fall. However, the plants reseed themselves so generously that they are considered sicklepod weeds, and are hard to eradicate. A tough plant, sicklepod grows in most soils, including the poor, compressed earth between railroad ties.

Sicklepods are also drought tolerant and disease resistant. These qualities, together with its impressive seed quantities, make controlling sicklepod difficult.

Sicklepod weeds are especially unwelcome in agricultural row-crop situations. They impact crop yields when they grow in cotton, corn, and soybean fields.

Sicklepod is also a bad thing to have growing in a pasture since it is toxic. Hay taken from pastures with sicklepod weed in them is of no use for livestock since they refuse to eat the contaminated hay.

People faced with these problems are interested in sicklepod control. They want to know how to get rid of sicklepod plants.

How to Get Rid of Sicklepod Plants

Sicklepod control is not as difficult as controlling some other weeds. You can remove sickleweed manually by pulling it up by the roots as long as you are sure to pull out the entire taproot.