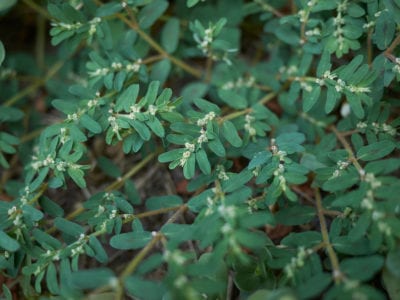 Spotted spurge weed can quickly invade a lawn or garden bed and make a nuisance of itself. Using proper spotted spurge control can not only eliminate it from your yard, but can also help prevent it from growing in your yard in the first place. Keep reading to learn how to get rid of spotted spurge.

Spotted spurge (Euphorbia maculata) is a dark green plant with red stems that grows low to the ground in a mat-like fashion. It will grow outwards from the center in a rough wagon wheel shape. The leaves are oval shaped and have a red spot in their center (which is why this spurge is called spotted spurge). The flowers on the plant will be small and pink. The entire plant has a hairy appearance.

Spotted spurge has a milky white sap that will irritate the skin if it comes in contact with it.

How to Get Rid of Spotted Spurge

Spotted spurge often grows in poor, compacted soil. While killing spotted spurge is relatively easy, the hard part is keeping it from coming back. The tap root of this plant is very long and its seeds are very hardy. This weed can and will grow back from either root pieces or seeds.

Because of the spotted spurge weed’s mat-like nature, hand pulling is a good option for removing spotted spurge from the lawn or flower beds. Be sure to wear gloves due to the irritating sap. Make sure that you pull this weed before it has a chance to develop seeds; otherwise, it will spread rapidly. After you have hand pulled the spotted spurge, watch for it to start growing again from the tap root. Pull it again as soon as possible. Eventually, the tap root will use up all of its stored energy trying to regrow and will die completely.

You can also use herbicides, but many herbicides will only work for spotted spurge control while the plants are young. Once they reach a mature size, they can resist many forms of weed killers. When using herbicides for killing spotted spurge, it is best to use them in late spring or early summer, which is when spotted spurge will first sprout.

One of the few herbicides that will work on mature spotted spurge is a non-selective type. But be careful, as this will kill anything it comes into contact with, and the spotted spurge may still regrow from the roots, so check frequently for regrowth and treat the plant as soon as possible if you see it.

Pre-emergent sprays or granules can also be used for spotted spurge control, but these will only be effective before the seeds have sprouted.