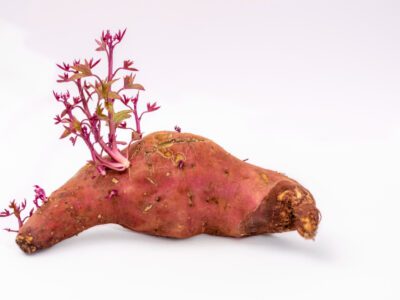 The potato bonsai “tree” idea started out as a tongue-in-cheek gag that has turned into a fun and interesting project for both adults and children. Potato bonsai growing can show kids how tubers grow and can help teach children the basics of the responsibility and patience required to grow plants.

How to Make a Potato Bonsai

For your bonsai potato project, you will need:

First, you need to make a potato bonsai container. Use the shallow container and drill or cut small holes in the bottom for drainage. If you would like, you can paint the container as well.

Next, take a look at your sprouted potato. Right now the sprouts should be a pale color and have not formed themselves into leaves yet. The pale sprouts will become either roots or leaves, depending on the environment they are put into. Decide which side of the potato will grow into the best potato bonsai tree. Lay the potato into the container with the potato bonsai tree side up.

The leaves on your potato bonsai tree will start to appear in one to three weeks. A potato bonsai growing in warmer conditions will sprout leaves faster than ones growing in cooler conditions. Also, some sprouts will grow up from beneath the gravel line. These sprouts should be removed. Only keep the sprouts that grow from the part of the potato that appears above the soil.

Once your potato bonsai tree has several leaves on the sprout, you can start pruning your potato bonsai. Shape the individual stems as though they were actual bonsai trees. Be sure to remind children not to trim too much off the plant. Go slowly. More can be taken off, but you can’t put it back on if too much is taken off. If by chance a child does take too much off, not to worry. Potato bonsai gardening is a forgiving art form. Place the potato bonsai back into a sunny spot and it will regrow.

Keep your potato bonsai watered and trimmed and it will last quite some time. As long as the potato is kept healthy and is not overwatered or underwatered you should not see any rot or decay.