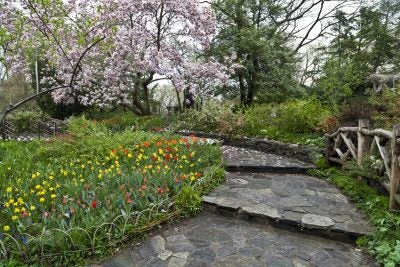 In the United States, some of the largest Shakespeare gardens can be found in New York’s Central Park and Brooklyn Botanical Gardens, the Golden Gate Park in San Francisco, and the International Rose Test Garden in Portland, Oregon. Devising a Shakespeare garden design of your very own is every bit as fun as it challenging. Read on for a few tips to get you started.

How to Create a Shakespeare Garden Design

Prior to selecting plants for a Shakespeare garden, it helps to have some knowledge of Shakespeare’s plays and sonnets, which you probably already have if you’re considering a Shakespearean garden design. However, if you’re like most of us, you may have to dig into your memory banks a bit to come up with ideas.

Shakespeare was an avid gardener, or so they say. It appears that he loved roses, which he mentioned at least 50 times. You can even purchase a William Shakespeare rose, a lovely burgundy rose created by an English breeder.

Other plants mentioned in Shakespeare’s work include:

Elizabethan gardens of Shakespeare’s time tended to be formal, often divided equally into symmetrical flower beds. Beds were frequently defined and protected by a hedge or stone wall, depending on available space. However, gardens inspired by Shakespeare’s writings can also be less formal, such as a meadowor woodland garden, with deciduous or fruit trees to provide shade.

Most public Shakespeare gardens include placards or stakes with the name of the plant and the associated quote. Other common features are garden benches, sundials, concrete urns, brick pathways and, of course, a statue or bust of the world’s greatest playwright.