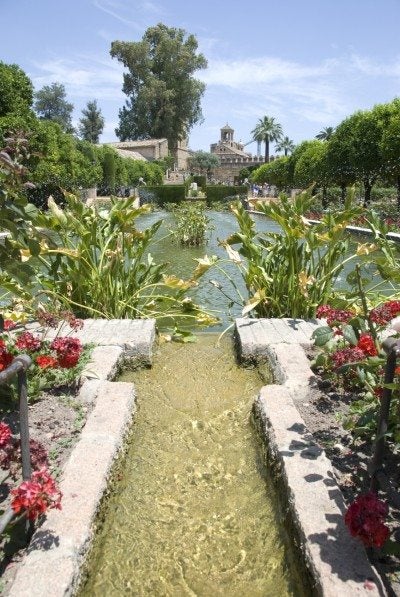 The urge to create beauty in one’s surroundings is a human characteristic but, in many cases, it is also a reflection of religious beliefs. Islamic tradition includes historic gardens built as a result of the Koran’s teachings and as a reaction to the arid conditions in which these people lived. The Islamic garden design of ancient civilizations such as Persia, Turkey, Asia, India, Egypt, and Morocco to name but a few, is still in evidence as archeological sites and, occasionally, continued gardens.

Desert conditions and sparse vegetation dominate much of the Middle East and western to south-eastern Asia. The lack of water and pressing sun, wind, and heat require surcease and shelter from the constant weather. Walled gardens filled with trees, water features, fruits, and flowers were the answer to this need and also glorified God by surrounding the faithful with His riches.

In these serene gardens, Muslims could contemplate and meditate upon nature in peace and serenity. Some Muslim gardens still persist and bear similar features as the early 7th to 16th century examples of the art form.

Ancient civilizations honored God with arts of many kinds. Building an Islam garden paradise was a way of honoring God and enjoying the beauty He had given them. The gardens contained elements specifically mentioned in the Koran, along with features borrowed from Asian and European garden traditions.

Creating Islamic gardens and landscapes around estates and palaces enhanced the buildings and the lifestyles of those that lived there, but also provided common grounds with play fields and cultural activities. Islamic garden plants were often brought in from other countries, but some of the flora was native and cultivated for maximum effect.

Most Islamic gardens contained courtyards, paths, fountains, and playing areas. Some even had zoos and racecourses. An element that is not seen is statuary because the Koran strictly forbids such artwork. The waterways helped irrigate the plants but also provided dimension and sound to the garden. Often the garden featured a kiosk, which might be a small semi-open structure or even a closed, closely fortified edifice.

Water was not only life but also a symbol of wealth and prosperity in ancient Islam. The dry locations of many of the practitioners of the religion meant water was a valuable commodity. Gardens with waterways and features dominated the theme and not only created oases of shade, humidity, and calm, but practically watered the landscape.

The Islamic garden is usually designed as a “four-fold,” which is where the land is divided into squares by channels of water. Ideally, Islam garden paradise was found in each square no matter how large or small.

Sketching out the paths and waterways first will help the modern gardener mimic the Islamic garden style. Once these basic elements are laid, planting tall shade trees, fruit trees, shrubs, and lower appealing flowering plants tie in the other existing features.