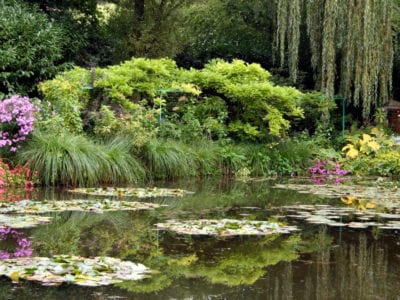 Claude Monet’s garden, like his art, was a means of self-expression. Monet loved his garden so much that he considered it his most beautiful work.

How to garden like Monet? The brilliant impressionistic artist was a skilled horticulturalists who sought out the finest new plants from around the world. He was bold and unafraid to experiment with texture and color.

It probably didn’t hurt that he had eight children, as well as six gardeners to help with his garden in Giverny, France.

Have you thought about planting a Monet-style garden? Here are a few tips to pique your artistic creativity.

Monet kept a “paint box garden,” where he experimented with new plants and various color combinations.

His garden reflected his knowledge and appreciation of color. One area would display various shades of red and pink. A sunset garden showed off-blooming plants in bright shades of orange, red, and yellow, sometimes splashed with blue, gray, or green. An island, which he often formed in mounds to show plants to better advantage, might consist of nothing but deep pink and red geraniums.

Some areas were populated with restful colors like pink and white or blue and white, while others were focused on bold primary colors like blue forget-me-nots and bright red tulips. Monet understood how to use splashes of white throughout the garden to add sparkle, even in shady spots.

Plants in a Monet-Style Garden

Although it was carefully planned, Monet’s garden had a natural, wild look. He liked big, showy flowers such as sunflowers and hollyhocks, and low-growing plants like nasturtiums, which were allowed to sprawl across walking paths. He also incorporated native plants, which returned every year and required very little attention.

Monet planted what he liked, and very few plants were off-limits. A Monet-style garden would likely include some of his favorites, such as mums, anemones, dahlias, peonies, asters, delphiniums, lupine, azalea, wisteria, and of course, iris, especially purple, blue, violet, and white.

He preferred simple flowers with single petals, rather than “fancy” blooms. Similarly, he didn’t like variegated foliage, which he considered too busy and unnatural. He loved roses, which he often grew on trellises so the blooms could be seen against the blue sky.

Willows, bamboo, spruce, cherry, pine, and other shrubs and trees were used in Monet’s garden to artfully frame the landscape. A key feature was his water garden, which contained water lilies and other aquatic plants, as depicted in many of his paintings.