Cairn Garden Art: How To Make A Rock Cairn For The Garden 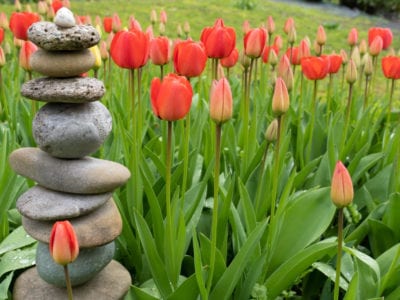 Creating rock cairns in the garden is a great way to add something different, yet appealing, to the landscape. Using cairns in gardens can provide a site for reflection, as the contrasting colors and shapes of the stones create a calming, peaceful feeling.

In simple terms, a rock cairn is just a pile of stones or rocks. Cairns have been used for thousands of years. In ancient times, they served as an intricate form of art, as small rocks were precariously balanced on top of smaller rocks, artfully constructed with no tools or mortar to hold them together.

Cairns have also been used as monuments or to mark a burial site. England’s Stonehenge is an example of a famous cairn. Today, they make popular markers along hiking trails.

Decide on the best location for the cairn. You can place it in a peaceful, wooded garden or an open area where growth is sparse. Remove weeds or turf where you want to build the cairn and smooth out the soil with a rake.

Cairn garden art can be conical with each succeeding layer becoming smaller, or they can be columnar. The cairn can be as small or as tall as you like; however, garden cairns usually don’t exceed the height of the builder.

How to Make a Rock Cairn

Gather a variety of large, flat rocks to form the base of the cairn, then stack the stones in a pleasing arrangement. Use care, as a sturdy base will allow you to create a taller cairn.

You can use a single, large stone as a base, or several smaller stones. Often, it works well to use large or semi-large stones, then use smaller rocks to fill in the spaces between the stones. Place the stones close together in a locking pattern.

Once the base is in place, add the second layer of stones. Place the layer so the edges of the stones are staggered with the stones of the first layer, similar to building a wall with staggered bricks. This general pattern will make your rock cairn more stable.

Continue to add rocks to the cairn. If there are wobbly spots or a stone doesn’t settle securely against the layer below it, add smaller stones to act as stabilizers, shims or wedges. If it helps, you can place a few of the stones on edge.

You can experiment with round stones and interesting shapes, but flat stones are easier to work with.