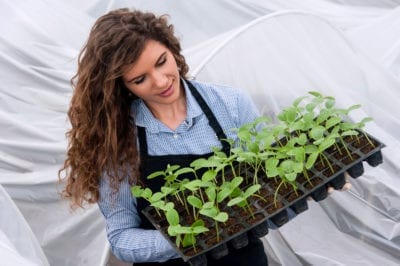 The New Alchemy Institute (NAI) in Massachusetts had the idea to use compost in greenhouses to generate heat. They began with a 700 square foot (65 sq. m.) prototype in 1983 and carefully recorded their results. Four detailed articles on compost as a heat source in greenhouses were written between 1983 and 1989. The results were varied and heating a greenhouse with compost somewhat problematic at first, but by 1989 many of the glitches were ironed out.

The NAI declared that using compost in greenhouses as a heat source was risky since composting is both an art and science. The amount of carbon dioxide and nitrogen produced was a problem, while the amount of heating provided by compost greenhouse heat insufficient to warrant such an output, not to mention the cost of specialized composting equipment. Also, nitrate levels were too high for safe production of cool season greens.

By 1989, however, the NAI had revamped their system and resolved many of the more challenging issues with using compost as a heat source in greenhouses. The whole idea of utilizing compost greenhouse heat is to channel the heat from the composting process. Raising the soil temperature by ten degrees can increase plant height, but heating a greenhouse can be expensive, so harnessing the heat from composting saves money.

How to Use Compost as a Heat Source in Greenhouses

Fast forward to today and we’ve come a long way. The systems of heating a greenhouse with compost studied by the NAI used sophisticated equipment, such as water pipes, to move heat around large greenhouses. They were studying using compost in greenhouses on a massive scale.

For the home gardener, however, heating a greenhouse with compost can be a relatively simple process. The gardener can use existing compost bins to warm specific areas or implement trench composting, which allows the gardener to stagger row plantings while keeping the heat up through the winter.

That is the basics for using compost as a heat source in a greenhouse. It is a simple concept, albeit temperature swings will occur as the compost breaks down and should be accounted for.