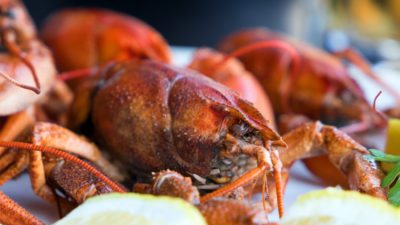 In Maine, where a majority of the U.S. lobsters are caught and processed, lobster producers have considered many ways to dispose of lobster byproducts. For example, a few professors and students at the University of Maine invented a biodegradable golf ball made from ground lobster shells. Named “Lobshot,” it was specifically created for golfers on cruise ships or boats, as it breaks down within a few weeks of being lobbed into water. Generally, though, lobster byproducts are legally dumped back into the ocean or used in the production of compost. Since the early 1990’s, many lobster producers in Maine and Canada have jumped on the compost bandwagon.

Using Lobster Shells in the Garden

A home garden’s compost pile will be localized and personalized by its gardener. In the Midwest, where everyone loves their lush green lawns, a gardener’s compost pile will probably contain a lot of grass clippings; but in arid desert-like areas, grass clippings can be sparse in a compost pile. Coffee lovers, like myself, will have plenty of coffee grounds and filters to compost; but if you start each day with a healthy, homemade smoothie, your compost bin may contain a lot of fruit and vegetable peels. Likewise, in coastal areas where seafood is a common staple, naturally, you would find clam, shrimp, and lobster shells in compost bins.

What you put in your compost bin is up to you, but the key to great compost is proper balance of nitrogen rich “greens” and carbon rich “browns.” In order for a compost pile to heat up and decompose properly, it should be comprised of about 1 part “greens” for every 4 parts of “browns.” In composting, the terms “greens” or “browns” doesn’t necessarily describe colors. Greens may refer to grass clippings, weeds, kitchen scraps, alfalfa, coffee grounds, eggshells, etc. Browns may refer to pine needles, dry leaves, paper products, sawdust or wood shavings, etc.

It is also very important to frequently turn and stir a compost pile, so it can evenly decompose.

How to Compost Lobster Shells

Some plants that will benefit from the extra calcium from composted lobster shells include: