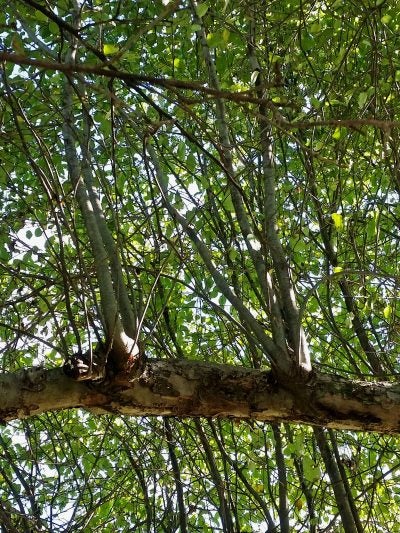 Apple tree water sprouts drain vital energy from a tree without providing any benefit in return. Find out what causes unsightly water sprouts and what to do about them in this article.

What are Water Sprouts?

Water sprouts are thin shoots that arise from the trunk or branches of an apple tree. Most water sprouts serve no useful purpose and will never produce much fruit. Many never produce any fruit at all. They are also called suckers, although this term more accurately refers to growth that arises from the roots rather than the trunk and branches.

Apple tree growers remove water sprouts so that the tree can direct all of its energy toward supporting productive branches. Pruning apple tree sucker growth and water sprouts helps to keep the tree healthy because the unwanted growth is weak with little defense against invasion by insects and diseases. Removing water sprouts also eliminates unnecessary foliage so that sunlight and fresh air can reach deep inside the canopy of the tree.

Water sprouts on apple trees usually arise from places on the trunk or branch where the bark has been injured or from pruning wounds. Trees that have been renovated after a long period of neglect may have an abundance of water sprouts the following summer. You can easily pluck them off with your fingers when they first emerge. Later on, you’ll have to cut them.

Winter dormancy is the proper time for pruning an apple tree, but you should prune to remove water sprouts and suckers as soon as they arise in late spring or early summer. Try to catch them when they are no more than 12 inches (30.5 cm.) long. At this point, you can pull them off by hand. Once the base of the sprout hardens and becomes woody, you’ll have to cut them off with pruners. You should cut as close as possible to the parent branch, but even so, you may not be able to get the entire base of the sprout. They may regrow if you leave a little of the original growth.

Disinfecting your pruners between cuts can go a long way toward preventing the spread of disease. Make a solution of one part household bleach and nine parts water. Alternatively, you can use a full-strength household disinfectant such as Lysol. Dip your pruners into the solution between cuts to kill any bacteria or fungal spores you may have picked up in the previous cut. Leaving your pruners sitting in bleach for a long period of time or a failure to clean them thoroughly before putting them away can result in pitting.