What Is Black Rot: Treating Black Rot On Apple Trees 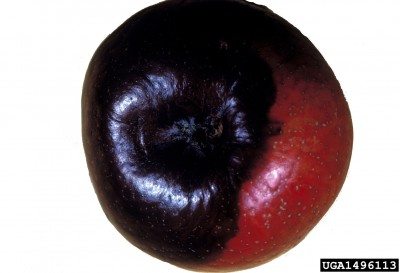 Apple trees are amazing assets to the home landscape and orchard, but when things start to go wrong, it’s often a fungus that’s to blame. Black rot in apples is a common fungal disease that can spread from infected apple trees to other landscape plants, so it’s important to watch your apple trees for signs of black rot disease in order to catch it early in the disease cycle.

Distressing as it is, when block rot attacks your apple trees, it’s not the end of the world. You can get your apples back and have healthy harvests if you understand how to destroy the disease.

What is Black Rot?

Black rot is a disease of apples that infects fruit, leaves, and bark caused by the fungus Botryosphaeria obtusa. It can also jump to healthy tissue on pear or quince trees but is typically a secondary fungus of weak or dead tissues in other plants. Begin checking your apple trees for signs of infection about a week after the petals fall from your apple blossoms.

Early symptoms are often limited to leaf symptoms such as purple spots on upper leaf surfaces. As these spots age, the margins remain purple, but the centers dry out and turn yellow to brown. Overtime, the spots expand, and heavily infected leaves drop from the tree. Infected branches or limbs will show characteristic red-brown sunken areas that expand each year.

Fruit infection is the most destructive form of this pathogen and begins with infected flowers before fruits expand. When fruits are tiny and green, you’ll notice red flecks or purplish pimples that enlarge as the fruit does. Mature fruit lesions take on a bulls-eye appearance, with bands of brown and black areas expanding outward from a central point in each lesion. Commonly, black rot disease causes blossom end rot or mummification of the fruits on the tree.

Treating black rot on apple trees starts with sanitation. Since fungal spores overwinter on fallen leaves, mummified fruits, dead bark, and cankers, it’s important to keep all the fallen debris and dead fruit cleaned up and away from the tree.

During the winter, check for red cankers and remove them by cutting them out or pruning away the affected limbs at least 6 inches (15 cm.) beyond the wound. Destroy all infected tissue immediately and keep a watchful eye out for new signs of infection.

Once black rot disease is under control in your tree and you’re again harvesting healthy fruits, make sure to remove any injured or insect-invaded fruits to avoid re-infection. Although general-purpose fungicides, like copper-based sprays and lime sulfur, can be used to control black rot, nothing will improve apple black rot like removing all sources of spores.