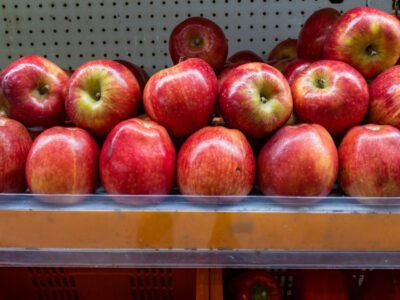 Enterprise apples trees are relatively new to the wide spectrum of apple cultivars. It was first planted in 1982 and introduced to the wider public in 1994. Known for its late harvest, disease resistance, and tasty apples, this is a tree you might want to add to your garden.

What is an Enterprise Apple?

Enterprise is a cultivar that was developed jointly by the Illinois, Indiana, and New Jersey Agricultural Experimental Stations. It was given the name ‘Enterprise’ with the ‘pri’ that stands for the universities involved in its creation: Purdue, Rutgers, and Illinois.

One of the most notable features of this cultivar is its disease resistance. Battling disease in apple trees can be difficult, but Enterprise is immune to apple scab and highly resistant to cedar apple rust, fire blight, and powdery mildew.

Other notable characteristics of Enterprise are its late harvest and that it stores well. The apples ripen beginning in early to mid October and continue to produce into November in many locations.

The apples are deep red in color, tart, and juicy. They retain excellent quality after two months in storage, but are still good after three to six months. They can be eaten raw or fresh and be used for cooking or baking.

How to Grow an Enterprise Apple

Growing Enterprise apple is great for anyone who is looking for a late harvest, disease-resistant tree. It is hardy to zone 4, so it does well in apple’s colder range. Enterprise may have a semi-dwarf rootstock, which will grow 12 to 16 feet (4-5 m.) or a dwarf rootstock, which will grow 8 to 12 feet (2-4 m.). The tree should be given at least 8 to 12 feet (2-4 m.) of space from others.

Enterprise apple care is similar to care for any type of apple tree, except easier. Disease is less of an issue, but it is still important to be aware of signs of infections or infestations. Enterprise apple trees will tolerate a variety of soils and only need to be watered until established and then only if it is not getting an inch (2.5 cm.) or more of rain fall in the growing season.

This is not a self-pollinator, so be sure you have one or more other apple trees nearby to set fruit.