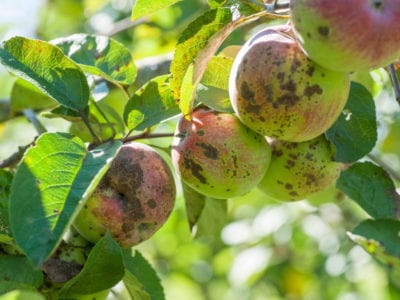 Apple trees are perhaps one of the most popular fruit trees to grow in the home garden, but are among the most prone to disease and problems as well. But, if you are aware of the most common growing problems, you can take steps to keep them away from your apple tree and the fruit, which means you can enjoy more and better apples from your trees.

Apple Scab – Apple scab is an apple tree disease that leaves warty, brown bumps on the leaves and fruit. It is a fungus that primarily affects trees in areas that have high humidity.

Powdery Mildew – While powdery mildew affects a great many plants, and on apple trees it can decrease the number of flowers and fruit and cause stunted growth and blemished fruit. Powdery mildew on apples will look like a velvety covering on leaves and branches. It can affect any apple variety, but some varieties are more susceptible than others.

Apple Rusts – The rust that affects apple trees is commonly called cedar apple rust, but it can be found in one of three different forms of rust fungus. These apple rusts are cedar-apple rust, cedar-hawthorn rust and cedar-quince rust. Cedar-apple rust is the most common. Rust will commonly appear as yellow-orange spots on the leaves, branches and fruit of the apple tree.

Collar Rot – Collar rot is a particularly bad apple tree problem. Initially, it will cause stunted or delayed growth and blossoming, yellowing leaves and leaf drop. Eventually a canker (dying area) will appear at the base of the tree, girdling and killing the tree.

Sooty Blotch – Sooty blotch is a non-lethal but blemishing fungus that affects the fruit of an apple tree. This apple tree disease appears as dusty black or grey spots on the fruit of the tree. While it looks unsightly, the fruit is still edible.

Flyspeck – Like sooty blotch, flyspeck also does not harm the apple tree and only causes cosmetic damage to the fruit. Flyspeck will appear as groups of small black dots on the fruit of the tree.

Fire Blight – One of the more devastating of the apple tree diseases, fire blight is a bacterial disease that affects all parts of the tree and can lead to death of the tree. Symptoms of fire blight include die back of branches, leaves and blossoms and depressed areas on the bark that will be discolored and are, in fact, areas of the branches that are dying.