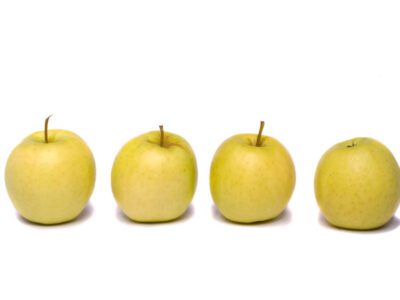 Ginger Gold is an early producing apple that has lovely ripe fruits in summer. Ginger Gold apple trees are an Orange Pippin cultivar that has been popular since the 1960’s. With a beautiful spring display of white blushed flowers, it is a pretty and productive tree. Learn how to grow Ginger Gold apples and enjoy early fruits and a heat tolerant tree.

There are many wonderful apple cultivars available for both commercial and home growers. Growing a Ginger Gold apple tree provides fresh fruit even during the heat of summer, much earlier than most apple varieties. Most fruit is ripe and ready to pick by mid to late August.

Trees attain 12 to 15 feet (4-4.5 m.) in height and are considered semi-dwarf plants, making them ideal for most landscapes and easy to harvest. There are also dwarf trees that grow just 8 feet (2 m.) tall with a similar spread.

The spring flowers are white tinted with pink, usually opening in April. The fruit is yellowish gold when ripe, and large with creamy white flesh. The flavor is described as crisp and sweet-tart.

Fruits have a natural resistance to browning. They are best eaten fresh but also make a nice sauce or dried fruit. Ginger Gold apples keep in cool temperatures for just one to two months.

Ginger Gold is a cross between Newtown Pippin and Golden Delicious and was developed by Ginger Harvey in Virginia. United States Department of Agriculture zones 4 to 8 are perfect for growing a Ginger Gold apple tree.

This is a self-sterile tree that needs a pollinating companion such as Red Delicious or Honeycrisp.

Trees need pruning early in development and take two to five years to bear, but once they do, harvests are abundant.

Plant in full sun with well-draining soil when temperatures are still cool. Bare root trees should be soaked in water for one to two hours prior to planting. Stake young trees to help stabilize and straighten the main stem.

This variety is susceptible to cedar apple rust and fire blight. Early season fungicide applications can reduce the risk of trees becoming diseased.

Prune when the tree is dormant. Always prune to a bud at an angle that will cause moisture to fall away from the cut. Prune trees to a central leader with several strong scaffold branches. Encourage horizontal branches and wide angles between stems. Remove dead and diseased wood and create an open canopy.

Pest issues need to be preventively dealt with by early season applications of pesticides and the use of traps.

Ginger Gold is considered a light feeder of nitrogen. Feed the apple trees annually in early spring after they are two to four years of age.