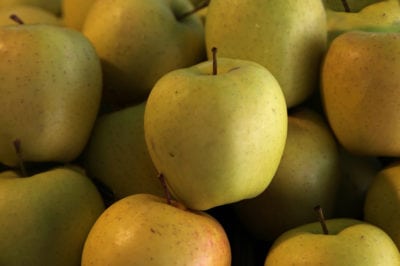 Goldrush apples are known for their intensely sweet flavor, pleasant yellow color, and resistance to disease. They are a relatively new variety, but they are worthy of attention. Keep reading to learn more about how to grow Goldrush apples, and tips for planting Goldrush apple trees in your home garden or orchard.

Where do Goldrush apple trees come from? A Goldrush apple seedling was planted for the very first time in 1974 as a cross between Golden Delicious and Co-op 17 varieties. In 1994, the resulting apple was released by the Purdue, Rutgers, and Illinois (PRI) apple breeding program.

The apples themselves are relatively large (6-7 cm. in diameter), firm, and crisp. The fruit is green to yellow with an occasional red blush at the time of picking, but it deepens to a pleasant gold in storage. In fact, Goldrush apples are excellent for winter storage. They appear very late in the growing season, and can hold up easily for three and up to seven months after being harvested.

They actually attain a better color and flavor after several months off the tree. The flavor which, at harvest time, can be described as spicy and somewhat tangy, mellows and deepens into being exceptionally sweet.

Growing Goldrush apples is rewarding, as the trees are resistant to apple scab, powdery mildew, and fire blight, of which many other apple trees are susceptible.

Goldrush apple trees are naturally biennial producers, which means they will produce a large crop of fruit every other year. By thinning the fruit early in the growing season, however, you should be able to get your tree to produce well annually.

The trees are self-sterile and cannot pollinate themselves, so it’s necessary to have other apple varieties nearby for cross-pollination to ensure good fruit set. Some good pollinizers for Goldrush apple trees include Gala, Golden Delicious, and Enterprise.