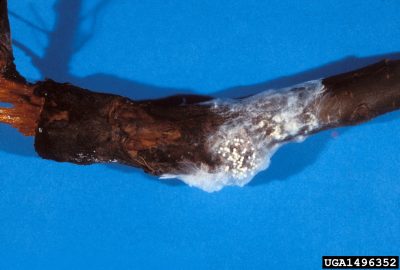 For years, scientists thought that southern blight in apple trees was only a problem in warm climates. They believed that the fungus structures that overwinter were not cold hardy. However, this is no longer considered true. Gardeners in Illinois, Iowa, Minnesota, and Michigan have reported incidents of southern blight of apples. It is now known that the fungus can survive winter cold, especially when it is covered up and protected by layers of snow or mulch.

The disease is mostly an issue in apple growing areas in the Southeast. Although the disease is often called southern blight of apples, apple trees are not the only hosts. The fungus can live on some 200 different types of plants. These also include field crops and ornamentals like:

The first signs that you have apple trees with southern blight are beige or yellow, web-like rhizomorphs. These growths appear on the lower stems and roots of the trees. The fungus attacks the lower branches and the roots of apple trees. It kills the tree’s bark, which girdles the tree.

By the time you notice that you have apple trees with southern blight, the trees are on their way to dying. Typically, when trees get southern blight of apples, they die within two or three weeks after the symptoms appear.