Apricot Rust Control – How To Treat Rust On Apricot Trees 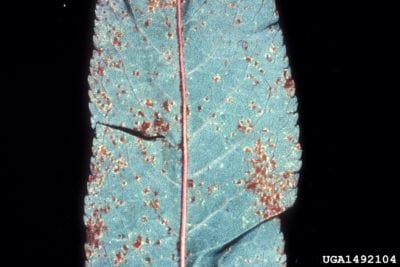 If you are growing apricots in your home orchard, you anticipate munching the luscious golden fruit. But when you own this fruit tree, you also may have to deal with apricot rust fungus. Rust on apricot trees is the most common disease of this fruit tree. If you have or want apricot trees in your backyard, read on. We’ll give you information on apricots with rust fungus and techniques for controlling apricot rust.

Rust on apricot trees is caused by the fungus Tranzschelia discolor. As the fungus name suggests, rust discolors the apricot leaves. Look for the first symptoms of apricot rust fungus on the bottom side of the leaf. Mahogany colored blisters appear there, with a corresponding yellow splotch on the top surface.

Apricots with rust fungus lose their leaves early. They turn black and drop from the tree late in the season. The tree ends up without leaves earlier than if it had lost its leaves normally.

When you see rust on apricot trees, you might want to rush into apricot rust treatment. But keep in mind that apricots with rust fungus don’t die right away. In fact, small rust infestations may do no harm at all. Even severe infestations may damage the tree’s growth but don’t kill it.

That means that you have time to figure out how to prevent rust before using chemical sprays. Taking steps to prevent the disease is really the best way of controlling apricot rust.

When you are thinking about controlling apricot rust, your best bet is to take steps to prevent conditions that encourage rust. Rust likes moisture and cool weather, so keep your trees in bright sunlight and spaced apart to allow air circulation.

On top of that, prune your apricot trees so that as many leaves as possible get sunlight. Raking up fallen foliage is also an important part of controlling apricot rust. For future plantings, pick cultivars that are rust resistant.

If rust returns year after year, you’ll have to use apricot rust treatment. Find a fungicide specifically made for apricot rust and use it according to label directions. Spraying starts in spring before the buds flower, then is repeated at regular intervals through the season.

Note: Any recommendations pertaining to the use of chemicals are for informational purposes only.  Organic approaches are safer and more environmentally friendly. Chemical controls should only be used as a last resort.