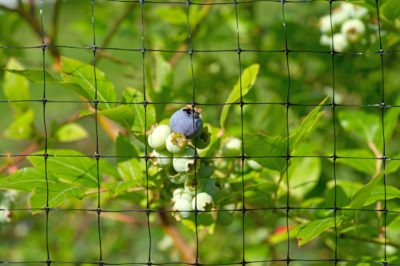 If you grow blueberries in your yard, chances are you have had to battle the birds to get your share of the bounty. You may have even lost the battle and thrown in the towel. It’s time to take back your blueberry bushes by protecting the blueberry plants from the birds. The question is how to protect blueberry plants from birds? Read on to find out several ways to protect blueberries from birds.

How to Protect Blueberry Plants from Birds

Blueberry plant protection may involve more than one tactic. Birds, like most any other creature, become accustomed to things over time, so what may initially work suddenly ceases to deter them within a couple of weeks. So, blueberry plant protection may become an ongoing, ceaseless process. That is, of course, unless you try exclusion. Exclusion just means you’re going to prevent the birds from entering the blueberry patch by means of netting.

Protecting blueberry plants from birds with netting can be as simple as draping netting over the bushes or building an actual reverse aviary. If you are going to drape the netting directly over the bushes, wait until after the shrubs have bloomed and the fruit is forming. If you do it when the bush is in bloom, you’re in danger of damaging them and with no flowers you get no fruit.

Carefully drape the netting over the bush or stretch of bushes and tuck the edges around all of the fruit. Cover the plant to the ground if possible. This will keep the birds from hopping under the netting and getting at the fruit that way. As far as the netting goes, that’s all there is to it. However, there is a possibility that some little bird might get tangled in the netting, so keep an eye on it.

Otherwise, to create a reverse aviary, use 7 foot (2 m.) bamboo poles or the like to create a structure that surrounds the blueberries and then cover that with netting. Staple the net into place. You could also use hoops to build a tunnel covered with netting if you have a long line of berries or purchase a crop cage or bird control pop-up net that fits over raised beds.

There are other ways to protect blueberries from birds besides netting. There are chemical repellents that are said to keep the birds away, but it sounds like the results are short term– about three days post application. Commercial growers also apply sugar syrup to blueberry shrubs. The downside of this is that while it does indeed repel birds, it increases the incidence of Japanese beetles and yellow jackets.

Audio scare tactics are another way to dissuade the birds. Cannons, gunfire, firecrackers, taped noises, radios, you name it, have all been tried. The call of hawks does seem to work for a time, but blueberries ripen over such a long period, the birds eventually get used to the sound and go back to gorging on the berries. A combination of audio and visual scare tactics seems to work the best. An example of this is an owl model that is powered by a solar cell, and shrieks at intervals.

Some people try lighting, such as strobe lighting, to deter the birds. There are also other products available that claim to keep the birds from crops. Most of them are just that, claims. The best way to keep the birds from the blueberries is via exclusion with netting or by trial and error with the combination of visual and audio scare tactics combined with chemical deterrents.