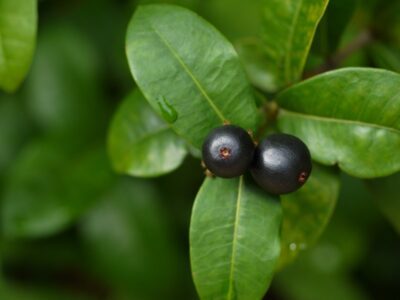 Based upon its name, one might think the Chinese box orange (Severinia buxifolia) produces edible citrus fruit. Unfortunately, that’s not the case. However, this plant does have many positive attributes and can be a wonderful addition to the landscape. Let’s find out why you might consider planting box orange in your yard.

What is Chinese Box Orange

Severinia buxifolia is native to southern China, Vietnam, Malaysia, and the Philippines, where it can often be found growing in thickets and forests. This member of the citrus family is a slow-growing evergreen shrub with thick, dense foliage.

Like most citrus, the box orange has thorns. It produces fragrant white flowers in spring and summer. These are followed by seedy black fruits that rarely exceed half an inch (1 cm.) in length. The oval-shaped fruit tends to be inconspicuous but serves as a food source for birds.

This shrub is sometimes referred to as a boxthorn, as the small, oval leaves are quite similar to boxwood (Buxus spp.). Like boxwood, this shrub is highly valued when cultivated and trimmed as a hedge.

The boxthorn plant has been introduced into Florida, where it is hardy in USDA zones 8B through 10. Although it has escaped cultivation, it does not appear to be an invasive species in Florida. The box orange can also be grown along southern and western coastlines and inland areas where tropical plants are hardy.

In 1988, an international collaborative effort was undertaken to catalog and publish descriptions of over 30,000 native Chinese plants. Although still scientifically classified as Severinia buxifolia in other taxonomical publications, the “Flora of China” lists the box orange as Atalantia buxifolia.

In addition, variants of the box orange have been discovered throughout its native distribution range. These variants differ in physical characteristics, such as leaf shape or thorn size, as well as physiological traits. As of yet, these Chinese box orange variants have not been recognized as different species, subspecies, or varieties.

In Cantonese, the common name for Atalantia buxifolia is “tsau ping lak,” which translates as “wine cake thorn.” It’s rumored the Chinese use boxthorn leaves when making yeast cakes. This is likely a very localized dish as recipes are not readily available in Western culture.

Finally, one of the most promising uses of the Chinese box orange is for root stock when grafting citrus trees. Here’s why: