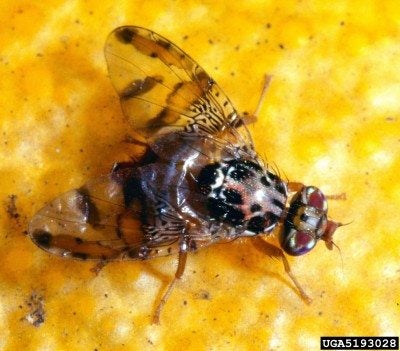 As home gardeners, we all know that our fruits and veggies are susceptible to a variety of pests. Citrus trees are no exception and, in fact, have a plethora of damaging pests which may infest the fruit. Among these are citrus fruit flies.

There are a number of fruit flies in citrus. These are some of the most common marauders:

One of the most disastrous pests, the Mediterranean fruit fly, or Ceratiitis capitata (Medfly), has afflicted areas from the Mediterranean, southern Europe, the Middle East, western Australia, South and Central America, and Hawaii. Medfly was first recognized in Florida in 1929 and damages not only citrus fruits but the following:

Also known as the Antillean fruit fly, or the guava fruit fly, this genus includes other species such as Anastrepha ludens, or Mexican fruit fly, known to affect fruit production and marketability of ripened citrus. A. supensa is about one-half to two times larger than the average house fly and has a wing band of dark brown whereas its counterpart, A. ludens, is yellower in hue. The dorsal or top of the thorax between the rear two plates is marked with a black dot.

Eggs are not usually visible, as the fruit flies of citrus trees lay their eggs singly under the peel of the fruit, and generally not more than one or two eggs per fruit. The insect transforms through three larval instars prior to pupation. The larvae tunnel through the fruit and then once completing their three instar stages, drop from the fruit to pupate in the ground. The pupa is long, oval, shiny brown and hard to the touch.

While the damage has been relatively minor with regards to production, protecting citrus from fruit fly pests has been a major concern among commercial growers.

The introduction of endoparasitic braconid wasps, which parasitize the larvae of the fruit fly, have shown excellent reductions in the population. Commercial citrus growers also release many sterile flies which interrupts the population since mating will not result in offspring.