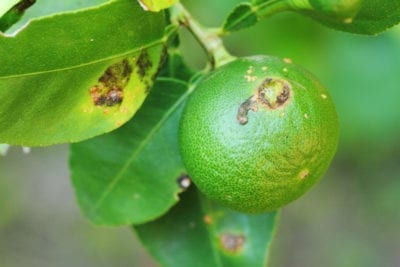 Citrus canker is a financially devastating disease that has been eradicated from the citrus market a couple of times only to return again. During past eradication attempts, thousands of trees were destroyed. Today, mass eradication has been deemed unfeasible, but there is still a quarantine regarding shipping or taking citrus across state lines. So, what exactly is citrus canker? Read on to learn about citrus canker symptoms and how to treat the disease should it appear in the home garden.

What is Citrus Canker?

Citrus canker goes way back to its discovery in Texas in 1910 and into Florida in 1914. It was introduced on seedlings imported from Japan. It is caused by the bacterium Xanthomonas citri and likely originated in southern Asia. The disease can now be found in Japan, the Middle East, central and southern Africa, and Central and South America.

This bacterium is extremely contagious and is fostered when there is steady rain combined with high temperatures. Both rainwater and overhead irrigation spread the bacteria from plant to plant and is then further spread by wind, birds and animals, people, and machinery.

Asian leaf miners also play a part in the spread of citrus canker. They do not act as vectors but rather cultivate infection and spread of the disease through damage caused in the foliage via feeding.

The initial symptoms of citrus canker are raised lesions that can be found on both sides of the leaf. They have a crater-like appearance surrounded by concentric circles. They may have a water-soaked margin and a corky texture. As the disease progresses, the lesions may be surrounded by a yellow halo.

Further into the infection, these halos become shot holes. You may see fungi (white fuzz) and fruiting bodies (black dots) on older lesions as well. The exact look of the disease varies depending upon the citrus tree variety and the length of time the tree has been infected.

How to Treat Citrus Canker

During initial infections in the United States, the only method available for treating citrus canker was to burn infected trees, an effort first waged by growers and then taken over by the agricultural state departments. Rigorous citrus canker controls were instigated wherein infected trees were not only destroyed, but all green wood trees were removed within a 50 foot (15 m.) radius of those infected. The disease was finally declared eradicated in 1933 at a cost of $6.5 million!

Today, with regards to treating citrus canker via chemicals, worldwide the disease is managed with preventive copper-based bactericides. This is generally used in conjunction with cultural practices such as pruning and defoliation of diseased summer and fall shoots and the use of windbreaks. Pruning is also done in the dry season when conditions are less favorable for the spread of the bacteria.

Other citrus canker control methods include the use of resistant citrus varieties and the introduction of a USDA quarantine program with restrictions on taking and bringing fruit into various states. Eradication has been deemed unfeasible due to a number of factors, primarily the cost and general uproar by non-commercial growers.