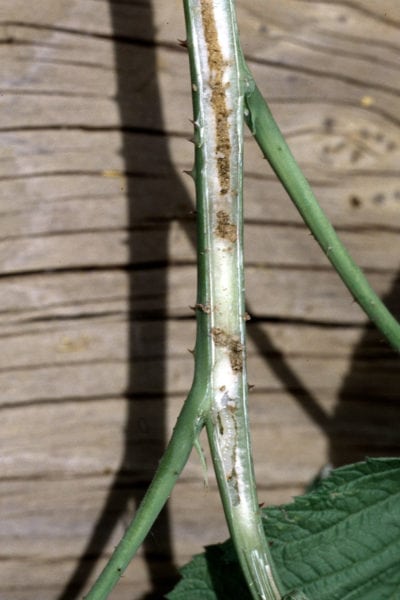 Raspberry horntail damage becomes most visible in early summer. What is a raspberry horntail? These wood wasps lay their eggs in caneberries, and the larvae burrow into the stem and eventually girdle it. The wasps themselves aren’t harmful to your raspberries, but their young do extensive damage. Some tips on how to manage raspberry horntails follows.

Raspberry horntail larvae are like teenagers running amok in your berry patch. While the parent is the originator of these pests, they have little effect on the berry canes. Controlling raspberry horntails begins with control of the adults, removal of host plants, and vigilance towards identifying infected canes. Host plants include wild brambles, caneberries (like raspberry and blackberry), and rose.

Since control would start with recognizing the adults and preventing them from laying the eggs, identifying cues are useful. The adults are about ½ inch (1 cm.) in length, having narrow bodies with iridescent black coloring and have very long antennae. The larvae are white with brown heads and an inch (2.5 cm.) long. They overwinter in the canes and adults emerge from small holes in the stem in early spring. The larvae also have a short, sharp spine at the rear end, from which the species name hails.

Females insert eggs under the epidermis in new growth. Usually, she only deposits one egg per cane. The pearl-like eggs have a pointed end and pupate inside the canes in early spring. Once they are larval, the larvae tunnels in a spiral form up the cane. Larvae feed on cambium until they reach the shoot tip, when they feast on both cambium and pith, creating a chamber.

Overwintering larvae that are older will reverse direction and tunnel into pith further down the cane where they chew out a large pocket in which to overwinter. The feeding and tunneling causes the tips of young growth to wilt. This is evident in June to July. Drooping tips and the presence of an ovipositor scar, dark reddish in color, indicate infestation.

Raspberry horntail control is necessary as soon as any shoot tip drooping is observed to prevent the insect from further girdling the cane and killing it.

How to Manage Raspberry Horntails

Choose products that do not harm pollinating insects. In most cases, manual practices are the most useful in controlling raspberry horntails. If only a few canes are affected, kill the larvae by squeezing the end of the cane.

For larger infestations, prune out the ends of canes and destroy the plant material. Watch canes and remove tips every two weeks to prevent larvae from maturing and burrowing down into the cane.