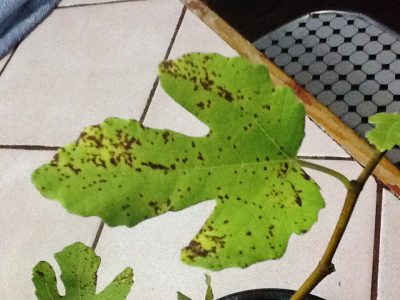 Image by Jon Willis via Q&A

Fig trees have been part of the North American landscape since the 1500s when Spanish missionaries brought the fruit to Florida. Later, missionaries brought the fruit to what is now California, but initial attempts at cultivation were failures. The fig wasp, so necessary to fertilization, was not indigenous to the area. Self-fertilizing cultivars fixed the problem. Today, fig trees can be found throughout the Southern United States and beyond.

The fig’s natural habitat is a warm, dry, Mediterranean-type climate and under those conditions, the fig is relatively pest free. However, under more humid conditions and heavier rainfall, figs are more prone to infestation by insects and disease. The most common fig disease, rust, occurs under these conditions.

Humid air or excessive rain will encourage this fig’s disease. Rust is a fungal growth that is rarely found in dry climates.

The first signs of fig rust on fruit trees are tiny yellow spots on the underside of leaves. The rust on fig leaves’ underside then spreads to the upper portion, and the spots become reddish brown. Home gardeners often miss early signs of the fig’s disease. Rust spots are only 0.2 to 0.4 inches (0.5 to 1 cm.) across and are easily missed until the infection is severe.

As the fig rust progresses, fig leaves will yellow and fall to the ground. Since rust on fig leaves is usually found in late summer or early fall, the new and tender replacement growth will be at risk for frost damage, which may, in turn, foster winter die back of branches. Though fruit is unaffected by the fungus, rust on fig leaves can encourage premature ripening of the fruit.

How to Prevent Fig Rust

The simplest way to prevent fig rust is to water only the ground under your figs. Rust fungus seeks free moisture on the leaves. Water in the morning so the sun has a chance to dry the foliage.

Careful pruning of fig trees can also help by improving air circulation through the branches, allowing the evaporation of excess water from the leaves of the figs. Rust will over winter in fallen leaves and debris, so fall cleanup is essential to prevent fig rust.

Once you find rust on figs, treatment is difficult as there are very few fungicides that are registered for use on figs. Rust seems to respond best to fungicides containing copper sulfate and lime. Bare trees should be sprayed during the dormant season followed by repeated treatments every two to three weeks. By the time you detect rust on figs, treatment is usually unsuccessful for the current season, but beginning a spray regimen can help prevent recurrence.

While rust on fig leaves and fruit can be a disappointment to home gardeners, it isn’t fatal. Proper cleanup and good air circulation will go a long way to keep the disease at bay and a spray treatment for previously infected trees can stop its recurrence.