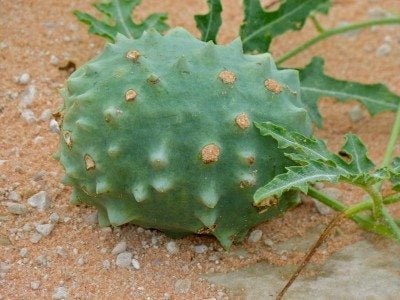 When you think of the family Cucurbitaceae, fruit such as squash, pumpkin, and, of course, cucumber comes to mind. All of these are perennial staples of the dinner table for most Americans, but with 975 species that fall under Cucurbitaceae’s umbrella, there are bound to be many most of us have never even heard of. Desert gemsbok cucumber fruit is likely one that is unfamiliar. So, what are gemsbok cucumbers and what other gemsbock African melon info can we dig up?

What are Gemsbok Cucumbers?

Gemsbok cucumber fruit (Acanthosicyos naudinianus) is borne off an herbaceous perennial with long annual stems. It has a large tuberous rootstock. Like squash and cucumbers, the stems of desert gemsbok cucumbers jumble out from the plant, grasping at surrounding vegetation with tendrils for support.

The plant produces both male and female flowers and a resulting fruit that looks artificial, like a plastic, pastel yellow toy that my dog might slobber over, soon follows. It is sort of barrel-shaped with fleshy spines and elliptical seeds inside. Interesting, hmm? So just where does gemsbok cucumber grow?

This plant is native to Africa, specifically South Africa, Namibia, Zambia, Mozambique, Zimbabwe, and Botswana. It is an important food source to the indigenous people of these arid regions not only for its edible flesh but also as an important hydration source.

Fruit of the gemsbok can be eaten fresh once peeled or cooked. Unripe fruit causes burning of the mouth due to cucurbitacins the fruit contains. The pips and skin can be roasted and then pounded to make an edible meal. Made up of 35% protein, roasted seeds are a valuable protein source.

The green jelly-like flesh apparently has a distinctive flavor and aroma; the description makes it seem less than palatable to me, as it is apparently quite bitter. Elephants, however, enjoy the fruit and play an important role in the dispersal of the seeds.

It can be found growing in woodlands, grasslands, and sandy soils where it thrives, unlike many plants. Gemsbok grows rapidly, is high yielding, and is perfectly suited for arid landscapes. It is also easily propagated and the fruit stores for long periods of time.

The tuberous roots are used in the preparation of arrow poison among the Bushmen of Angola, Namibia, and Botswana. On a lighter note, the extremely long and strong stems of the gemsbok are used by indigenous children of the region as skipping ropes.

How to Grow Desert Gemsbok Cucumber

Sow seeds in a mineral-based cat litter of germ-free perlite in a container. Tiny seeds can be scattered atop the medium while larger seeds should be lightly covered.

Place the pot in a large zip-lock bag and fill it partway with water that has a few drops of fertilizer in it. The substrate should absorb most of the water and fertilizer.

Seal the bag and place it in a partially shaded area in temps of between 73 and 83 degrees F. (22-28 C.). The sealed bag should act as a mini-greenhouse and keep the seeds moist until they sprout.