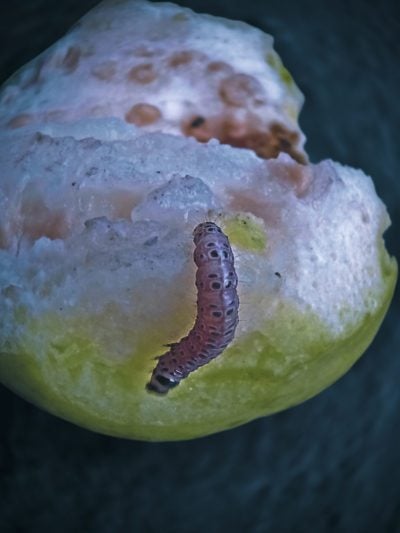 Guava trees are hardy, aggressive perennials native to tropical and subtropical America. They are one of 150 species of Psidium, of which most are fruit bearing. Hardy the guava may be, but they do have their share of guava pest problems, most of which can be dealt with using natural pest control methods for guava trees. In order to incorporate guava pest control, it’s important to be able to identify insects that attack guava trees and fruit. The following article discusses guava pests and how to deter insects on guava.

The Caribbean fruit fly is one of the most damaging pests in Florida guava production. The larvae infest the fruit, rendering it unfit for human consumption. To avoid fruit fly damage, fruit must be picked prior to full maturity, which means harvesting at least three times per week.

The larvae of the guava moth will tunnel into the fruit, making it inedible, and feed on the foliage of the plant as well. In the case of both of these guava pest problems, guava pest control involves wrapping the developing fruit with a paper bag when it is immature. Guava moths can also be controlled by spraying approved biological control agents.

Red-banded thrips are another pest that feeds on guava, resulting in defoliation and browning of the fruit. Guava whiteflies feed on guava leaves and, along with the green shield scale and weevils (in particular Anthonomus irroratus), require chemical pest control for guava grown commercially in Florida.

The larvae of the guava shoot borers get into twigs, killing new shoots. In India, there are at least 80 insect species that attack the guava tree, but for the most part these are kept in check by their natural enemies. In Puerto Rico, the coconut mealybug has been a damaging pest that has been combated with the introduction of its parasitic enemy, Pseudaphycus utilis.

Brazilian guava trees have been seen with severe zinc deficiency due to the presence of nematodes and can be treated with zinc sulphate in two summer sprayings, 60 days apart.

Aphids are sometimes found to inhabit guavas, leaving behind their sticky residue or honeydew. This honeydew attracts ants. Ants protect both aphids and scale insects from predators, and also move them around increasing the infestation. Ants can be combated by pruning any branches touching buildings or other plants that act as a bridge to the tree. Then wrap sticky tape around the trunk of the tree. Bait traps can also be set out around the base of the tree.

How to Deter Insects on Guava

As you can see, there are plenty of pests that are attracted to guava trees. The best way to combat insect attackers is to keep the tree healthy. Provide optimal growing conditions with irrigation when needed, adequate drainage and fertilization, and prune out any dead or diseased limbs.

Keep the area around the tree free from plant detritus and weeds that can harbor insects. Keep a close eye on the tree for any signs of pest damage so that appropriate guava pest control can be applied at the first sign of infestation.

Printer Friendly Version
Read more about Guava Trees
<PreviousNext>
Did you find this helpful? Share it with your friends!
FacebookTweetPinEmail
Related Articles
Newest Articles
You might also like…
Additional Help & Information