Hardy Kiwi Diseases: How To Treat A Sick Kiwi Plant 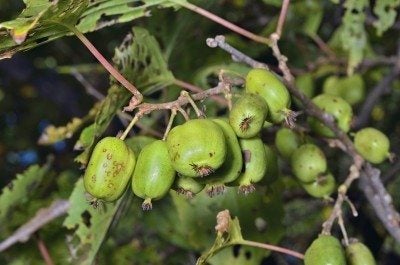 Native to southwestern China, kiwi is a long-lived perennial vine. Although there are more than 50 species, the most familiar in the United States and Canada is fuzzy kiwi (A. deliciosa). While this plant is tough and relatively easy to grow, it can fall prey to various kiwi plant diseases. Read on to learn more about diseases of kiwi.

Below you will find some of the most commonly seen diseases of kiwi plants.

Native to northeastern Asia, hardy kiwi (A. arguta) is different than fuzzy kiwi available in the local supermarket. Kiwi fruits are about the size of large grapes. The tart, greenish-yellow fruits, which are sweet and juicy when fully ripe, lack a tough, fuzzy covering and require no peeling. Hardy kiwi plants can become invasive in certain areas, crowding out native forest plants and trees.

Hardy kiwi diseases are similar to those that affect standard kiwi plants, but phytophthora crown and root rot are most common.

How to Treat a Sick Kiwi Plant

When it comes to treating kiwi diseases, an ounce of prevention is definitely worth a pound of cure. Healthy kiwi plants are disease resistant, but proper watering and well-draining soil are critical. Avoid clay-based soil. Kiwi plants do best in soil with a soil pH of about 6.5.

Fungicides are sometimes effective when applied as soon as fungal diseases are spotted. Bacterial diseases are extremely difficult to control and are often fatal.