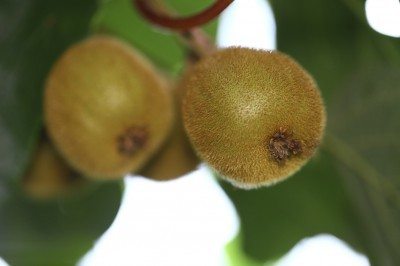 There are approximately 50 types of kiwi fruit. The variety you choose to grow in your landscape will depend upon your zone and the space you have available. Some vines can grow up to 40 feet (12 m.), which requires excessive trellising and space. There are four species that are cultivated for gardens: arctic, hardy, fuzzy, and hairless (Actinidia chinensis). Each has different characteristics, frost tolerance, and flavor. Choose your kiwi plant types by your location but also by your flavor and size preferences.

Kiwis were once thought to be tropical to sub-tropical vines, but careful breeding has resulted in cultivars that thrive in temperatures down to -30 degrees F. (-34 C.), such as the Arctic kiwi or Actinidia kolomikta. This is good news for kiwi lovers who want to produce their own fruit.

Different varieties of kiwi may have seeded or seedless, fuzzy or smooth, green, brown, purple, or red skin, and green or golden yellow-fleshed fruits. The choices are dazzling. Here are some of the most popular within the species.

Hardy kiwis are one of the newer vines developed for cooler season growing. These kiwi vine varieties are perfect for regions with light frosts and short growing seasons, such as the Pacific Northwest. They are hairless, green, and small but pack a lot of flavor and are tolerant of conditions that the fuzzy kiwi cannot withstand.

Actinidia chinensis is closely related to the fuzzy types of kiwi fruit but is hairless. Tropical, Arctic Beauty, and Pavlovskaya are other examples of A. chinensis.

Arctic Beauty is the most cold-tolerant of the different varieties of kiwi. It has extremely hardy fruit and pink and white variegation on the leaves, making it an attractive addition to the landscape. Fruits are smaller and sparser than the other kiwi vine varieties but sweet and delicious.

Krupnopladnaya has the largest fruit and Pautske is the most vigorous of the Arctic kiwis. Each of these does need male pollinators to produce fruit.

Kiwi vines can produce fruit almost anywhere today as long as they get full sun, training, pruning, plenty of water, and feeding. These extremely hardy specimens can bring a touch of the tropics to even zones with cold winters. Just remember to provide a thick layer of mulch around the root zone and these tough kiwis will sprout back in spring.