Harvesting Kiwi Fruit: How And When To Harvest Kiwis 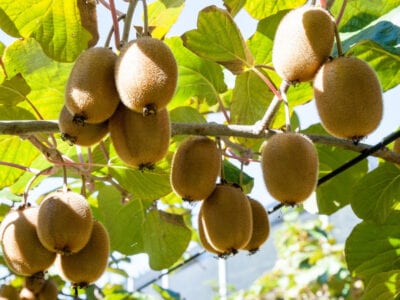 Kiwi fruit (Actinidia deliciosa), otherwise known as Chinese gooseberry, is a large–up to 30 feet (9 m.)–woody, deciduous vine native to China. There are primarily two types of kiwi fruit grown for production: Hardy and Golden. The fruit itself is a lovely green with tiny uniform and edible black seeds inside the fuzzy brown skin, which is removed before eating. This subtropical fruit adapts well in USDA zones 8 through 10. One mature kiwi plants may yield up to 50 pounds or more of fruit after an eight to twelve year period.

Knowing when to harvest kiwis can be a bit tricky. Commercial kiwi growers use a tool called a refractometer, which measures the amount of sugar in the fruit to determine the time of a kiwi fruit harvest. The refractometer is a bit pricey (about $150) for most casual kiwi home growers, so another method to determine when to harvest kiwis is in order.

When and How to Pick a Kiwi

So what, as the home gardener, do we need to know in how to pick a kiwi when it is ready? Since we do not have a refractometer to determine when sugar content is optimal (about 6.5 percent or greater), we may rely on the knowledge of when the kiwi fruit is generally mature enough for kiwi fruit harvest.

Kiwi fruit has attained full size in August, however, it is not mature enough for kiwi harvesting until late October to early November when the seeds have turned black and the sugar content has risen. Although fruit will soften off the vine after the sugar content is four percent, the sweet flavor has not developed until the content increases to six to eight percent. After kiwi harvesting, the starch is converted to sugar and will then be ready to eat once the fruit contains an astonishing 12 to 15 percent sugar.

Vine ripened kiwi has the best flavor but does not store well when ripe. Commercial kiwi harvesting occurs all at once, but the home gardener may very well be harvesting kiwi sporadically beginning in late September. Softness of the kiwi fruit is not always the best indicator of readiness. Unlike some other fruits, kiwi ripens after it has been removed from the vine.

When harvesting kiwi handle with care, as they bruise easily and damaged fruit has a limited storage life. To harvest kiwi, snap the stem at the base of the fruit. Again, softness is not a great determiner for readiness. Size, date, and when in doubt, cut open a fruit to access the seeds inside– when seeds are black, it is time for kiwi fruit harvest. Remove the larger fruit when harvesting kiwi and allow the smaller to remain on the vine and attain some size.

Kiwi storage can last some time– up to four to six months at 31 to 32 degrees F. (-5-0 C.), provided the fruit is kept chilled and away from other ripe fruit, which gives off ethylene gas and may hasten the demise of the ripening kiwis. To store kiwi, chill the fruit as soon as possible after picking and store at a high humidity. The colder the temperature for kiwi storage, the longer the kiwis keep.

For kiwi storage lasting up to two months, pick the fruit while they are still hard and store immediately in the refrigerator in a vented plastic bag. To ripen the kiwi fruit, remove them from the fridge and place them in a vented plastic bag with an apple or banana at room temperature to hasten ripening. They will also ripen on their own at room temp, it will just take a little longer.

The kiwi will be ripe and ready to eat once it is soft to the touch. Eat immediately, as soft kiwi does not last very long.