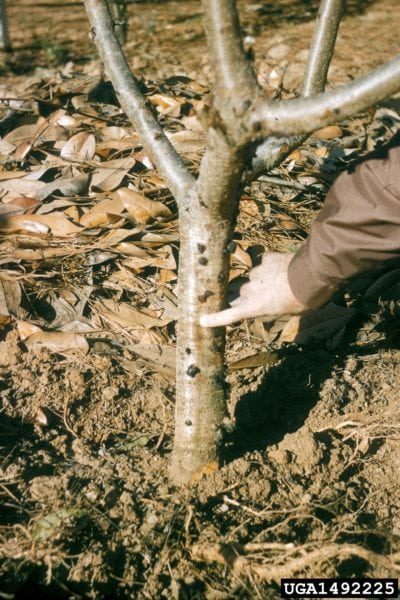 Phytophthora root rot of peach is a destructive disease that afflicts peach trees around the world. Unfortunately, the pathogens, which live under the soil, may go unrecognized until the infection is advanced and symptoms are obvious. With early action, you may be able to save a tree with peach phytophthora root rot. However, prevention is the best means of control. Read on to learn more.

About Phytophthora Root Rot of Peach

Trees with peach phytophthora root rot are usually found in soggy, poorly drained areas, especially where the soil stays heavy and wet for 24 hours or more.

Phytophthora root rot of peach is somewhat unpredictable and may kill the tree gradually over a few years, or an apparently healthy tree may decline and die suddenly after new growth appears in spring.

Symptoms of peach with phytophthora rot include stunted growth, wilting, reduced vigor and yellowing leaves. Leaves of trees that die slowly often display a reddish-purple coloration in autumn, which should still be bright green.

That’s why preventing phytophthora root rot of peaches is important and your best line of defense. Start by selecting peach tree varieties that are less susceptible to disease. If you don’t have a good spot for peaches, you may want to consider plums or pears, which tend to be relatively resistant.

Avoid locations where the soil remains wet or is prone to seasonal flooding. Planting trees on a berm or ridge may promote better drainage. Avoid overwatering, especially in spring and autumn when the soil is most susceptible to soggy conditions and disease.