What Is A Bosc Pear: Bosc Tree Growing Conditions 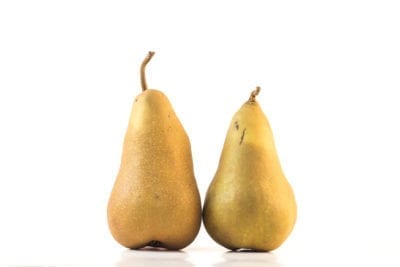 Pear lovers know the classic flavor of a Bosc pear and will accept no alternatives. What is a Bosc pear? Unlike most pear varieties, Bosc sweetens early so you can enjoy the fruit almost from picking. A Bosc pear tree will produce later into the season than other types. This variety is an abundant producer. Usually, harvesting Bosc pears starts in early to mid-fall, and the fruit will last well into winter with proper storage.

What is a Bosc Pear?

Bosc pears were introduced in the early 1800s. This means they have been part of our diet for some time and are firmly entrenched as one of the tastiest of pears. It is unclear if the variety is Belgium or French in origin but it is a late-season producer, often called a winter pear. Cooler regions of the country are perfect for Bosc tree growing. Some tips will help you learn how to grow Bosc pears.

Boscs develop a sweeter flavor while on the tree and do not need as much cold storage time for a wonderful flavor. If the fruit is harvested very early, it will reach peak flavor in 14 days. The skin on Bosc pears is a wonderful rust tone with mottling, while the interior flesh is creamy white, sweet, and buttery. In fact, in some areas, the variety is called Buerre Bosc.

How to Grow Bosc Pears

You will need a full sun location with well-draining soil and end-of-summer cooling for the best Bosc tree growing. A Bosc pear tree is easy to cultivate once established.

Use a stake when the tree is young to train it straight and prune the pear tree annually to promote a strong scaffold form. Prune each branch by a third in spring to help the plant achieve a nice open vase shape. As the tree begins to produce fruit, some may have to be removed early if clusters are too thick. This will allow other fruits to mature fully.

Fertilize the plant in spring by spreading well-rotted manure around the root zone. Watch for pest and disease issues and combat them immediately.

You may want to wait to see if your Bosc pears turn a prettier color or become soft to the touch, but don’t. The leathery skin and cinnamon brownish cast are a natural part of this variety. The greenish undertones will become subtly more yellow when the fruit is ripe and the base of the stem may wrinkle a bit.

The best way to determine when to harvest is by checking the neck. Exert gentle pressure at the neck to detect if it is softening. The fruit can be eaten right off the tree and will be sweet-tart, crisp, and refreshing. You can finish ripening early pears by leaving them at room temperature. Only refrigerate pears once they are ripe.