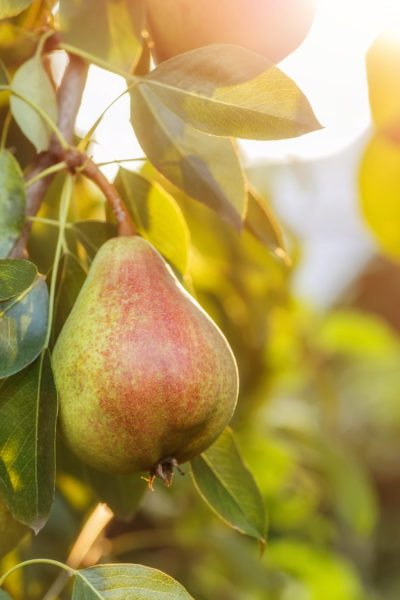 What is a European pear? The cultivated European pear (Pyrus communis) was most likely descended from two subspecies of wild pear, P. pyraster and P. caucasica. Wild pears may have been gathered and eaten as far back as the Bronze Age, but what is certain is that the ancient Greeks and Romans wrote of pear grafting and cultivation.

Pears were brought by settlers to the New World where they eventually migrated to the Pacific Northwest in the 1800’s. Today, over 90% of all European pears cultivated are found growing in this region primarily in the Hood River Valley of Oregon and into California.

European pears trees are deciduous. They thrive in moist soil with full to partial sun exposure and will reach heights of up to 40 feet (12 meters). They have simple, alternate, oval-shaped, dark green leaves that are serrated. Young tree bark is gray/brown and smooth but as the tree matures it becomes channeled and flaky.

In the spring, the tree blossoms with white to whitish-pink blooms of five petals. Fruit matures in the fall with colors ranging from green to brown depending upon the cultivar.

How to Grow European Pears

When growing a European pear, assess the size of your garden and choose your pear cultivar accordingly. Remember, they can get up to 40 feet (12 m.) tall. There are also dwarf and semi-dwarf cultivars available.

Once you have decided on a pear tree, dig a hole slightly wider than and as deep as the root ball of the tree. Amend the soil in the hole with plenty of compost. Remove the tree from its container and set it into the hole at the same depth. Spread the roots out in the hole and then back fill with the amended soil. Water the new tree in well.

Once the new tree has been planted, drive a sturdy post into the ground near the trunk and stake the tree to it. Mulch around the tree, taking care to leave at least 6 inches (15 cm.) from the trunk, to retain moisture and retard weeds.

For most gardens, fertilizing the tree once per year should be enough. Fruit tree spikes are a great way to get the job done. They are simple to use and provide a slow release of fertilizer.

Keep the tree regularly watered, once or twice a week until the roots have established. Thereafter, water each week to two weeks, deeply.

Compared to other types of fruit trees, care for European pears is fairly minimal. You should, however, prune the tree when it is newly planted. Leave a central leader. Choose 3-5 outward growing branches and prune out the rest. Trim the ends of the remaining 3-5 outward growing branches to encourage growth. Thereafter, pruning should only be to remove crossed branches or those that are broken or have become diseased.