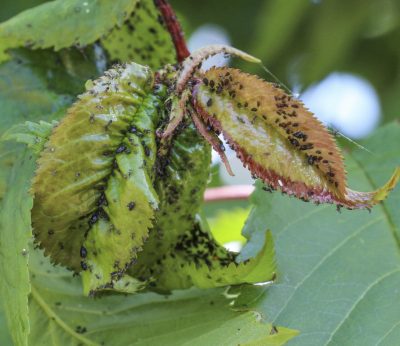 Of the fruiting trees, plum trees have the least number of pests. Even so, plum trees do have some insect problems that can wreak havoc with fruit production or even kill the tree. Early identification of pests on plum trees and controlling pests on plums can make all the difference in the health of the tree and its yield. The following information focuses on common plum tree pests.

Help, I Have Plum Tree Bugs!

First of all, don’t panic. Early identification of plum tree bugs will help you to figure out how to control or eradicate them. Inspect the tree often for any signs of infestation. Here are the most common plum tree insect problems to watch out for:

One of the most common plum tree pests is plum curculio. This ½-inch (1.25 cm.) long beetle overwinters in the soil and then emerges in the spring. Adults are brown and scaly with long pinchers that they use to tunnel into fruit. The female beetles lay eggs under the surface of developing fruit. The emerging larvae burrow deep into the fruit as they eat, causing it to rot.

Start checking for signs of plum curculio just as the tree begins to form fruit. Check the fruit for any signs of egg-laying scarring. If you see any such signs, spread plastic sheeting under the tree in the early morning. Shake the branches to dislodge adult beetles. They will fall onto the plastic tarp, looking much like bud scales or other debris. Gather all the beetles and dispose of them. This procedure must be repeated daily in the spring when they are most active and then off and on through the summer.

If this sounds like too much work, of course, spraying with a low-toxicity insecticide is another option. As soon as you see any sign of egg-laying scars, apply the first round of insecticide and then spray again two weeks later.

Plum aphids are another common pest found on plum trees. Aptly named, plum leaves are the pests’ favorite food. These aphids are green, yellow, or brown and under ½ inch (1.25 cm.) in length. They are found in curled foliage. The curled leaves then do not photosynthesize properly, which stunts the tree and/or fruit and, in severe cases, will kill the tree.

Yet another common pest found on plum trees is the rust mite, which also affects other fruit trees like pears. Less than ¼ inch (0.5 cm.) in length, they may be yellow, red, pink, white, or even purple. In the case of mite infection, leaves turn a silver color and curl up. If you see this, look on the underside of the leaves for clusters of mites to verify the tree has rust mites.

We already discussed controlling plum curculio; apply a pesticide in the fall but what can be done about controlling other pests on plums? Shake the limbs of the tree to dislodge Japanese beetles much as recommended for non-chemical control of plum curculio. Kill the beetles by plopping them into some soapy water.