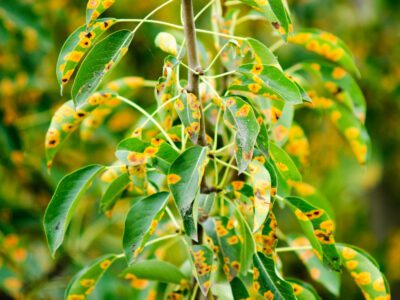 Pear rust mites are so tiny that you have to use a magnification lens to see them, but the damage they cause is easy to see. These tiny creatures overwinter under leaf buds and loose bark. When temperatures rise in spring, they emerge to feed on young, tender leaf tissue. When the tissue of the young leaves harden, the mites begin feeding on the fruit. Although unsightly, pear rust mite damage is only skin deep and comes off when you peel the fruit.

Pear rust mite damage consists of bronzing or darkening of pear leaves and fruit. This discoloration, called russetting, begins on the underside near the vein that runs down the center of the leaf and gradually spreads outward. The tops of the leaves may remain green and look healthy. Heavily damaged leaves can cause young trees to become stunted.

Once the pears form, the mites move from the foliage to the fruit. They cause a darkening of the surface tissue, also called russetting. The damage occurs at the stem end of the fruit. Although heavily rust infected fruit is unacceptable for marketing, the fruit is fine for home use. The damage is only on the surface and easily removed by peeling the fruit.

Pear rust mites only damage pear trees and can’t spread to any other fruit.

Pear rust mites have several natural enemies, including green lacewings and predator mites, but they are not usually effective in bringing the mites under control. Even so, you should avoid using broad spectrum insecticides and pyrethroids, which will give the mites a leg up by destroying beneficial insects and predator mites.

While light infestations that don’t cause significant cosmetic damage can safely be ignored, heavily infested mature trees and young trees with severe leaf damage benefit from chemical rust mite control. Sulfur sprays can help bring pear rust mites under control if used properly. Choose a product labeled for pear rust mites and apply it according to the label instructions.

Spray the tree in summer at leaf fall or during post harvest in autumn (which is usually preferred). Also, make sure to treat on a calm day so that the spray isn’t carried long distances on the wind. Store any unused portions of the product in the original container and out of the reach of children.

Pruning rust mite damage is not an effective method of control.