Control Of Plum Rust: How To Treat Rust On Plum Trees 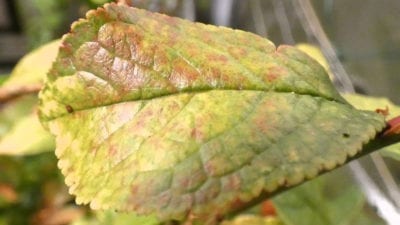 Image by Gardening Know How, via Joe Schuster

Plum rust fungus is a problem for plum tree growers, often showing up every year from spring through autumn. Rust on plum trees generally isn’t deadly, but it can weaken the tree and affect fruit quality if it is allowed to persist. Read on for information on the control of plum rust.

Early symptoms of rust on plum trees include stunted growth, small leaves, and blister-like cankers on the twigs. Tiny, yellow spots develop on the tops of leaves, with pustules of rusty or brown spores on the undersides showing up a little later. As leaves turn from yellow to brown, they often drop from the tree.

When treating plums with rust, spray affected trees with fungicide as soon as you notice signs of the plum rust fungus. Often, the disease doesn’t show up until later in the season. Your local cooperative extension office can advise you on the best product for your particular situation.

Prune the plum tree properly to improve air circulation. Remove contaminated debris around the tree. Dispose of the debris carefully or burn it.

Avoid use of high nitrogen fertilizers. Water carefully at the base of the tree using a drip system or soaker hose to keep the leaves as dry as possible. If you irrigate with a sprinkler, angle it so it doesn’t wet the leaves. Rust on plum trees is favored by soggy conditions.