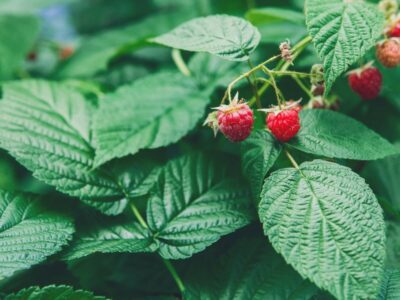 Of course, you’re disappointed. You’ve patiently been waiting to pick raspberries from the canes you planted, but nothing! Your raspberry plants aren’t producing. The plants look healthy, but the raspberries won’t form. Before you give up, let’s find the reason why you have a raspberry plant with no berries.

Sometimes it takes a bit of detective work to figure out why there’s no fruit on raspberry plants.

But before you don your detective’s hat, let’s first consider how raspberries grow. The root of the raspberry plant is a perennial which sends up new canes each year. The individual canes act like a biennial, with each cane living for 2 years before dying.

Everbearing raspberry canes produce berries twice in their lifetime — once in the fall of their first year and again in the summer of their second year. The fall berries are born on the tips of the cane, while the next summer’s berries emerge further down the stalk. After bearing fruit in the fall, the spent cane tips die back. This dead material at the very end of the cane can be safely pruned.

Summer-bearing raspberries don’t produce fruit their first year. If the tip of the cane is pruned in the fall, there will be no fruit on raspberry plants the following year. It’s essential to know which type of raspberry plants you are cultivating and prune accordingly.

Improper pruning is a common reason for having no fruit on raspberry plants, but other issues can also be the problem. Plants which fail to reach full size or produce fruit can be caused by improper growing conditions, pests or disease.

Raspberries grow best in raised beds full of rich, fertile soil. They require a minimum of 6 hours of direct sunlight per day and 1 inch (2.5 cm) of rain per week. If you’re fulfilling these needs and pruning correctly, yet still find the raspberry plants aren’t producing, then it’s time to look for  clues which indicate these common raspberry pests or diseases:

With a little perseverance, you can solve the mystery and understand why your raspberry plants aren’t producing.

Since you’ve worked so hard in the garden this summer we want to show off the fruits (and veggies) of your labor! We invite you to join the Gardening Know How Virtual Harvest Show by submitting photos of your harvest!

Printer Friendly Version
Read more about Raspberries
<Previous
Did you find this helpful? Share it with your friends!
FacebookTweetPinEmail
Related Articles
Newest Articles
You might also like…
Additional Help & Information