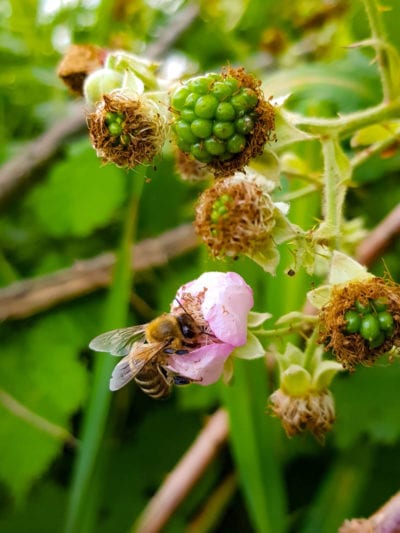 Raspberries are absolutely delicious, but they are also somewhat miraculous. The miracle of their existence has to do with raspberry plant pollination. How are raspberries pollinated? Well, raspberry pollination requirements seem to be twofold, a raspberry plant and a pollinator, but the process is much more complex than it first appears.

It turns out that pollinating raspberry plants is somewhat of a natural wonder.

How are Raspberries Pollinated?

To comprehend how raspberries are pollinated and realize the complexity involved in pollinating raspberry bushes, you need to understand the structure of a raspberry flower. Raspberry flowers are not single blooms but rather comprised of 100 to 125 pistils. Each pistil must be pollinated to create a mature seed and resulting drupe.

It takes about 75 to 85 druplets to make a fruit. If all of the druplets are not pollinated, the fruit will be misshapen. This means forming a complete juicy raspberry takes a lot of visits from many bees.

So, for perfect pollination to occur, obviously you need a raspberry plant and some bees, but again, this is a simplistic explanation. Raspberry flowers have five petals and a ring of anthers. Each bloom has many ovules each with its own stigma. Once the ovules are fertilized, they are called druplets.

As mentioned, while the flowers are partially self-fertile, they benefit greatly from bee visitations. The amount of pollination the flowers receive directly affects the size and number of fruits on a bush.

If you’re having issues with raspberry pollination in your garden, you can normally add more flowering plants to the garden to entice pollinators.