Raspberry Pruning: Information On How To Prune Raspberry Plants 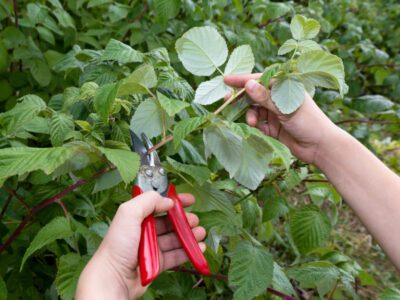 Growing raspberries is a great way to enjoy your own tasty fruits year after year. However, in order to get the most from your crops, it’s important to practice annual pruning raspberry pruning. So how do you prune raspberry bushes and when? Let’s find out.

Why You Should Prune Raspberry Plants?

Pruning raspberry bushes improves their overall health and vigor. In addition, when you prune raspberry plants, it helps increase fruit production. Since raspberries grow only foliage the first season (year) and flowers and fruit the next (second year), removing dead canes can make it easier to obtain a maximum yield and berry size.

When to Trim Raspberry Bushes

How and when to prune raspberries depends on the type you are growing.

How Do You Prune Raspberry Bushes?

Again, pruning techniques depend on variety. Red raspberries produce suckers at the base of previous season’s growth while black (and purple) form on new growth.

Summer-bearing – Remove all weak canes to the ground in early spring. Leave 10 to 12 of the healthiest canes, about ¼ inches (0.5 cm.) in diameter, with 6 inch (15 cm.) spacing. Tip prune any that may have suffered cold damage. Following summer harvest, prune off the old fruiting canes to the ground.

Fall-bearing – Fall-bearing can be pruned for either one crop or two. For two crops, prune as you would summer-bearing, then again after the fall harvest, pruning to the ground. If only one crop is desired, there’s no need to prune in summer. Instead, cut all canes to the ground in spring. There will be no summer crop, only one in fall using this method.

Note: Yellow varieties are also available and their pruning is the same as for the red types.

Remove fruiting canes after harvest. Tip prune new shoots in early spring 3 to 4 inches (8-10 cm.) to encourage branching. Top these canes again 3 to 4 inches (8-10 cm.) in summer. Then after harvest, remove all dead canes and those smaller than ½ inches (1 cm.) in diameter. The following spring, prune out weak canes, leaving only four to five of the healthiest and largest. Cut back the lateral branches of black varieties to 12 inches (31 cm.) and purple types to about 18 inches (46 cm.).