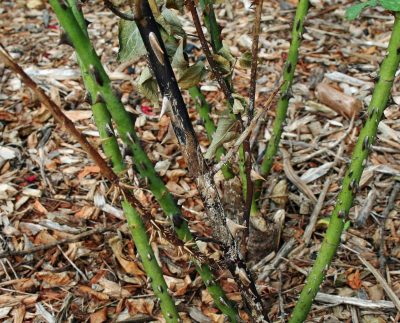 If your raspberry bush buds die, the side shoots wilt and the canes fail, cane blight is probably the culprit. What is cane blight? It’s a disease that attacks all kinds of cane plants including black, purple and red raspberries. You’ll do best to start a defense against cane blight early by adopting good cultural practices. Read on for information about plants affected by cane blight and cane blight control.

What is Cane Blight?

Cane blight is a disease that affects brambles. It is usually caused by the fungus Leptosphaeria coniothyrium, a fungus that can also attack roses and rot the fruit of apple and pear trees.

The fungus can live all winter long on dead canes. Spores formed on these canes cause infection when rain, wind or insects carries them into damaged areas or wounds on the canes.

A bacterial form of cane blight also exists. Bacterial cane blight is caused by an undetermined pathovar of the bacterium Pseudomonas syringae.

All bramble plants – that is, all Rubrus species – can be affected by cane blight. Perhaps the species most susceptible is black raspberry, but all raspberries can get it, as can roses.

No cane-blight-resistant raspberry cultivars have been identified yet. In the meanwhile, choose less susceptible cultivars.

You are most likely to see cane blight infections between late April and early May. Look for
bud failure, lateral shoot wilt, and cane death.

You are likely to first notice wilted foliage. Look carefully below this foliage for dark brown or purple cankers that can extend along the cane for several inches.

Bacterial cane blight symptoms are similar to those of the fungus-caused disease. Red-brown discolorations appear on stems, then turn dark purple or black and necrotic.

Control of cane blight is possible through both cultural and chemical means.

You can help prevent fungal cane blight by using cultural practices that prevent damage to the canes. These include eliminating weed-whacking near the canes, controlling insect pests and limiting pruning.

It also helps to try to keep the cane foliage dry, or aid its rapid drying. For example, keeping fruiting rows narrow and weeded assists them in drying after a rain, as does thinning out weak canes.

Also, you should take care with the cane site selection. You want the canes to have good drainage and air circulation.

If the cane blight disease is getting the best of your brambles, apply an application of lime sulfur or copper to your dormant plants. Use liquid lime sulfur when new leaves arrive, and be sure to cover all of the canes thoroughly.