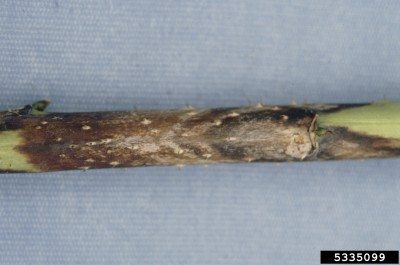 Several diseases attack raspberry plants, including spur blight. It has the most impact on red and purple raspberry brambles. What is spur blight? It is a fungal disease – caused by the fungus Didymella applanata – that attacks the leaves and canes of raspberry plants. Spur blight in brambles can reduce your raspberry harvest. Read on to learn about spur blight symptoms and spur blight control.

What is spur blight likely to do to your raspberries and other brambles? Nothing too nice. Spur blight infects both the leaves and the canes of brambles.

Leaves are usually the first part of the plants to show spur blight symptoms. The outer edges turn yellow, then the leaves die. Since lower leaves are usually the first infected, it’s easy to view the damage as normal leaf senescence. However, when leaves senesce, the leaf stem falls off with the leaf. In spur blight, the stem remains on the bush.

During severe attacks of spur blight in brambles, higher, younger leaves towards the top of the cane are also killed. The disease spreads from the infected leaves to the canes.

On the raspberry canes, the first signs of spur blight are dark, indistinct spots, either brown or purple, just below the point where a leaf attaches to the cane. The spots become lesions that grow quickly and can circle the entire cane. They are seen most easily in primocanes – first year canes – since older canes are darker in color.

The buds next to the spots do not sprout in the spring. There will be large areas of the cane that have neither leaves nor flowers. Bark may peel away from the cane and, under a magnifying glass, you can see tiny dots on the bark. These are the spore-producing structures of the spur blight fungus.

How to Manage Spur Blight

Wet conditions favor spur blight development. When you are trying to learn how to manage spur blight, think about what you can do to help keep the canes dry. This includes ensuring good drainage and using drip irrigation.

Spur blight control is aided by good air circulation through the canes. To achieve this, keep the rows quite narrow and the canes spaced well apart. Controlling weeds is also important.

When you are considering how to manage spur blight, remember to prune thoroughly and remove all pruned canes from the area. Producing only the fall crop on first year canes has been shown to be an effective means of spur blight control. You can also mow down the entire patch in fall and burn them.