Propagating Raspberries: Can You Grow A Raspberry Plant From Cuttings 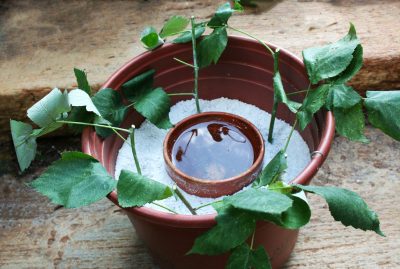 Raspberry plant propagation is gaining in popularity. After all, who doesn’t love the plump, juicy berry soon after strawberry harvest and just before blueberries are ripening? With a careful soil preparation and selection of virus free stock, propagating raspberries will keep you enjoying these edible brambles for years to come.

Raspberries, whether red, yellow, purple, or black, are susceptible to viruses. Resist the urge to propagate raspberries from an existing patch or your neighbor’s garden as these plants may be infected. It is always best to acquire stock from a reputable nursery. Raspberry propagations are available as transplants, suckers, tips, root cuttings, or tissue-cultured plants.

How to Propagate Raspberries

Can You Grow a Raspberry Plant from Cuttings?

Yes, raspberry plants can be grown from cuttings. However, as mentioned above, it is preferable to purchase raspberry starts from a reputable nursery to avoid any contamination.

Black or purple raspberries and some blackberry varieties are propagated by “tip layering” wherein the tip of the cane is buried in 2 to 4 inches (5-10 cm.) of soil. The tip then forms its own root system. The following spring, the new raspberry propagation is then separated from the parent, leaving 6 inches (15 cm.) of the old cane attached. This portion is referred to as “the handle” and should be snipped off at soil level to reduce any potential disease from carrying over.

When transplanting any of the above methods of raspberry propagations, be sure to plant in well-draining soil with good air circulation and adequate moisture. Do not start your berry patch in a previously Verticillium wilt prone garden area such as where tomatoes, potatoes, eggplant, or peppers have been grown.

This fungus stays in the soil for several years and can be devastating to your raspberry propagations. Keep black or purple raspberry propagations 300 feet (91 m.) from their red counterparts to reduce the risk of virus cross over. Follow these tips and you should be making raspberry jam for the next five to eight years.