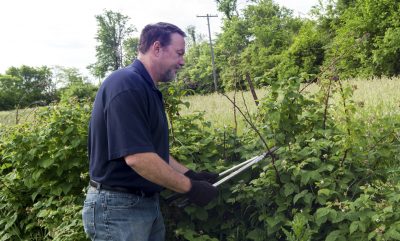 When Do I Prune Black Raspberries?

You will likely get a small harvest of berries in the late spring or early summer. After the plants quit fruiting, you will begin pruning the black raspberry bushes. Pruning at this juncture will set the plants up with healthy, productive canes and make for a more bountiful harvest.

It will also make harvesting easier; and at this time, you can confine the bushes’ size so they don’t grow rampantly and take up too much space.

How to Prune Black Raspberries

So, the first time you prune will be in the early fall. Wear long pants and sleeves, gloves, and sturdy shoes to avoid getting stabbed by thorns. Using sharp pruning shears, cut the canes so they are at consistent heights of between 28-48 inches (61-122 cm.). The ideal height is 36 inches (91.5 cm.), but if you want the canes taller, leave them longer. This early fall pruning of black raspberries will signal to the plant to produce more side branches.

Now you are going to thin the canes. There shouldn’t be any more than 4-6 canes per hill. Choose the 4-6 most vigorous canes and cut the rest out down to the ground. If the plants are still young, chances are they haven’t produced enough canes yet, so skip this step.

Next, you need to work on the lateral or side branches where the berries develop. For each side branch, count 8-10 buds away from the cane and then cut the rest off at that point.

You’re all done for the moment, but black raspberries should be topped 2-3 times during the next few months to facilitate lateral (fruiting) branches and to increase the strength of the cane so it grows more erect. Prune the raspberries to 36 inches (91.5 cm.) in height at this time; this is called topping. Basically, you are pinching out or cutting off the shoot tips, which will encourage lateral growth and result in higher berry production. After July, the canes become weaker, and you can cease pruning until early fall again.

For dormant pruning, remove all dead, damaged, and weak canes. Thin remaining canes to five to ten canes per plant. Lateral branches should be headed back to 4 to 7 inches (10-18 cm.) for blacks or 6 to 10 inches (15-25.5 cm.) for purples. More vigorous plants can support longer lateral branches. All canes should be topped to 36 inches (91.55 cm.) if they were not topped earlier.