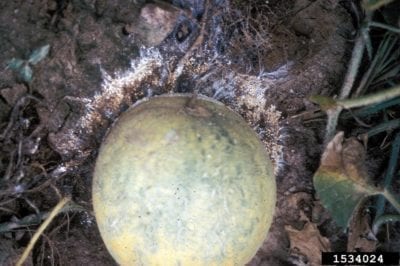 For many people, juicy ripe watermelons are a summertime favorite. Beloved for their sweet and refreshing taste, garden-fresh watermelons are truly a delight. While the process of growing watermelons is fairly simple, even the most experienced growers may encounter issues that reduce yields or lead to the ultimate demise of their watermelon plants.

In order to grow the best crop of watermelons, it is best that growers better familiarize themselves with pests and diseases that may impact the overall health of plants. One such disease, watermelon southern blight, is especially harmful during the hottest parts of the growing season.

What is Southern Blight of Watermelons?

Southern blight on watermelons is a fungal disease caused by the fungi, Sclerotium rolfsii. Though the incidence of this specific type of blight has increased in other crops over the last several years, the blight of crops such as watermelon and cantaloupe is common and can often occur in the home garden.

Signs of Southern Blight on Watermelon

The signs and symptoms of southern blight on watermelons may not be immediately noticeable. Watermelons with southern blight may first show subtle signs of wilting. This wilting will progress, especially on hot days, causing the entire plant to wilt.

In addition to wilting, watermelon plants infected with this type of blight will demonstrate girdling at the base of the plant. Over several days, the plant will begin to yellow and eventually die. Since the disease is soilborne, fruits in contact with the ground may also suddenly begin to rot and decay.

Though little can be done once southern blight has become established within the watermelon patch, there are some ways in which home growers can help to prevent the establishment of this fungus in the soil.

Since the fungus thrives in soil that is both warm and wet, growers need to make certain only to plant in well-amended and well-draining garden beds. Working the bed deeply will also help to prevent the presence of the disease.

In addition to the removal of the infected plant parts each season, a schedule of crop rotation should be followed from one season to another.