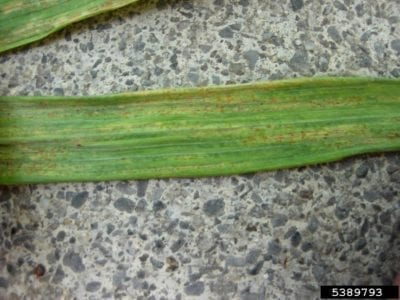 Stem rust is an economically important disease as it affects and can seriously reduce the yield of wheat and barley. Stem rust of barley can devastate your harvest if you grow this grain, but awareness and recognizing the signs early can help you minimize the damage.

Stem rust is a fungal disease that has been afflicting grain production for more than a hundred years. The fungus keeps evolving to overcome any natural resistance in barley so that varieties of the grain that were once resistant to the disease now may not be.

You’ll see the characteristic rust-colored lesions of barley with stem rust on the leaves, leaf sheaths, and stems. The lesions are reddish-orange to brown in color and are elongated as compared to leaf rust lesions, which are smaller spots.

Stem rust will also cause the outer layers of tissue on barley stems, leaves, and leaf sheaths to tear. This should be visible to the naked eye. A major distinction between other types of rust diseases is that stem rust infects the stems of barley while the other diseases do not.

How to Treat Barley Stem Rust

Because it affects several parts of the plant, barley stem rust is more damaging than other rust diseases. The yield loss you can expect depends on several factors. For instance, the earlier in the growth of the barely that the disease sets in, the worse the damage will be. Wet and warm weather conditions can also make the infection worse.

Effective barley stem rust control begins with using varieties of grain that have some disease resistance. Even those that do not resist it entirely are useful because the disease is more likely to set in later, and in that case much of the harvest can be saved.

The disease survives on grain that has self-sown or volunteer barley and then spreads to new plants in the spring. To prevent this spread, you can remove the extra growth. Hand-pulling, grazing, and using herbicides are all useful ways to get rid of the potential carriers.

Finally, you can treat barley stem rust when you see it on your grain. Foliar fungicides can be applied to manage the disease, and these are best used in the early stages of the infection. They are also best applied between the emergence of the flag leaf and flowering to get the best results. Apply more heavily if weather conditions favor the disease.