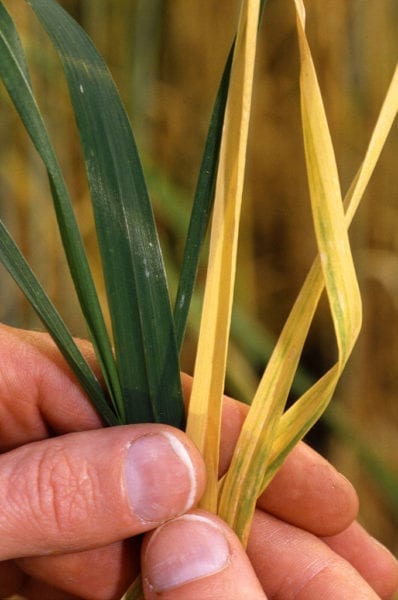 Symptoms of barley yellow dwarf virus vary depending on the crop, but the primary signs of disease are stunted growth and discoloration. Older leaves of wheat plants may turn yellow or red, while corn turns purple, red, or yellow. Diseased rice plants turn orange or yellow, and barley with yellow dwarf becomes a distinctive shade of bright, golden yellow.

Yellow dwarf virus of barley can also cause water-soaked areas on the leaves. The disease is often mistaken for mosaic or other plant diseases, and the symptoms often mimic nutritional problems or environmental stress. Stunting may be mild or significant. Kernels may be small or unfilled.

Causes of Barley with Yellow Dwarf

Yellow dwarf virus of barley is spread by certain types of winged aphids. The disease can be localized, or the aphids can travel from field to field with the help of strong wind. Symptoms generally show up a couple of weeks after an aphid infestation. Barley yellow dwarf virus is favored by warm falls followed by mild winters.

There’s not much you can do about treating barley yellow dwarf virus, but the following tips may help:

It’s always a good idea to start with disease-resistant seeds, but resistance varies depending on the plant. Keep weeds and wild grasses in check, along with volunteer wheat, barley, or oats. Grassy plants may harbor the virus.

Timing is critical. Plant spring cereal crops as early as possible to get ahead of aphid infestations. On the other hand, fall seeding should be delayed until the aphid population declines. Your local cooperative extension is the best source of information regarding optimal planting dates.

Insecticides aren’t recommended for control of aphids, and are generally not economical unless the infestation is extremely severe. Although insecticides have proven to be of little use, they will decimate populations of lady beetles and other natural predators, thus allowing aphids to thrive unchallenged. Systemic insecticides may help limit spread if applied when aphids are feeding on the plant. Unfortunately, fungicides have absolutely no effect on barley yellow dwarf virus.