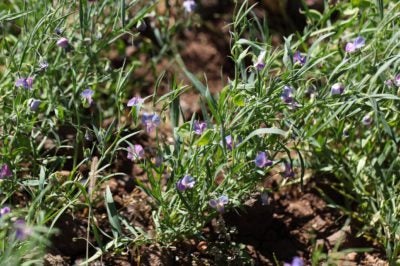 What is chickling vetch? Also known by various names such as grass pea, white vetch, blue sweet pea, Indian vetch, or Indian pea, chickling vetch (Lathyrus sativus) is a nutritious legume grown to feed livestock and humans in countries around the world.

Chickling vetch is a relatively drought-tolerant plant that grows reliably when most other crops fail. For this reason, it is an important source of nutrition in food-plagued areas.

Agriculturally, chickling vetch is often used as a cover crop or green manure. It is effective as a summer crop, but can overwinter in mild climates after fall planting.

It also provides a huge amount of beneficial organic matter that can be composted or plowed back into the soil after flowering. The creeping vines and long roots provide excellent erosion control.

How to Grow Chickline Vetch

Growing chickling vetch is an easy endeavor with just a few guidelines to follow.

Chickling vetch is suitable for growing in average temperatures of 50 to 80 F. (10 to 25 C.). Although chickling vetch adapts to nearly any well-drained soil, full sunlight is a necessity.

Although chickling vetch is drought tolerant, it benefits from occasional irrigation in hot, arid climates.

Immature chickling vetch seeds can be eaten much like garden peas, but they are toxic. Although the seeds are harmless in small quantities, eating large amounts on a regular basis may cause brain damage in children and paralysis below the knees in adults.