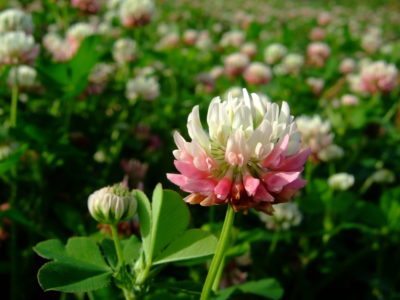 Alsike clover (Trifolium hybridum) is an extremely adaptable plant that grows along roadsides and in moist pastures and fields. Although it isn’t native to North America, it is found in cool, damp areas across the northern two-thirds of the United States. Plants have three smooth leaves with serrated edges. Small, whitish-pink or bicolor flowers appear along the length of the stems in late spring and early summer.

If you’ve never considered growing hybridum alsike clover, perhaps you should. Read on to learn more.

What is alsike clover used for? Alsike clover isn’t planted on its own. Rather, it is seeded along with grass or other plants, such as red clover, to improve soil, or as hay or pasture. It is rich in nutrition, providing food and protective cover for livestock and wildlife.

Avoid planting alsike clover in horse pastures, however. The plants may harbor a fungal disease that causes horses to become photosensitive, in which areas of the skin turn white before becoming red and painful. In severe cases, fungus in alsike clover may cause liver disease, evidenced by symptoms such as weight loss, jaundice, colic, diarrhea, neurological disturbances, and death. The fungus is most prevalent in rainy climates or irrigated pastures.

Other livestock should be introduced gradually to a pasture containing alsike because the clover may increase the risk of bloat.

How to Grow Alsike Clover