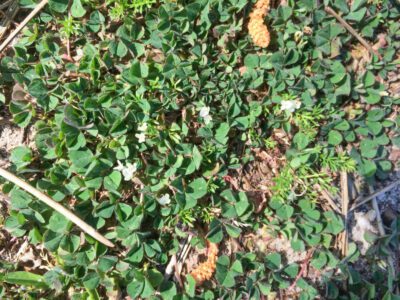 Soil building crops are nothing new. Cover crops and green manure are common in large and small gardens. Subterranean clover plants are legumes and, as such, have the capacity to fix nitrogen in soil. Nitrogen availability is crucial for much of a plant’s growth. Subterranean clover (Trifolium subterraneum) is a plant that spreads through underground stolons, or specialized stems, which fix nitrogen. The plant is useful in many different cropping applications.

What is Subterranean Clover?

Subterranean clover uses span many areas from soil improvement to beneficial insect habit. There are several species that thrive in Mediterranean environments, most of which thrive if planted in late summer to early fall. Plants go dormant in winter but come back into full leaf and bloom in spring.

The name for the clover actually comes from its reproduction process, not its spread through stolon. In spring, the seeds mature in a bur that is just below the soil surface. The plant is an annual legume but will readily reseed itself. This makes it an easy plant for use as a weed suppressor, erosion control, soil conditioner, animal fodder, and natural mulch or ground cover.

In most cases, the plant will come back annually, just from the seed of the previous season, especially if old growth is mowed down or grazed. Subterranean clover plants can be difficult to manage if you wish to kill the stand. Organic control is primarily through mowing, hand pulling and deep tillage at mid-bloom.

Adding nitrogen to soil is one of the primary subterranean clover uses. As a soil conditioner, it not only adds nitrogen but loosens soil and provides a cover crop that will compost into soil as a green manure.

The plant’s broad network of stolons act as a weed suppressor by choking out the roots of competitive species and smothering the emerging seedlings.

The plant is a useful forage for range animals, especially when planted with ryegrass or fescue. The plant is high in protein and later adds nutrients in a close cropped situation.

The clover is also of benefit in soil conservation and erosion control. The dense mat of vegetation efficiently grabs soil and holds it in place.

Another of the uses for sub-clover is as cover for beneficial insects as well as suppression of pest insect egg laying. Studies show the plant can reduce thrips and caterpillar populations, especially in Brassicas and Allium.

How to Grow Subterranean Clover

The seed for this clover is surface sown or just under a thin film of soil. After that, the plants just take off. Clover is one of the easier plants to grow, with vigorous shooting and spread. In most areas, plants stop production of leaves and stolon in late spring to early summer. The biomass remaining can be worked into soil, mowed or burned. The removal of the old plants is important to the re-establishment of seeds the next season.

One caveat regarding the plants and animals is that the clover can have high levels of oestrogen which can affect the fertility of females. It does not affect cows or goats but in areas with sheep, its use should be limited.